Filling up the car with petrol is the single biggest weekly purchase for most households.
Neil Dowling
Contributing Journalist
CarsGuide
2 Aug 2012 • 6 min read

Fuel prices have edged higher in the past week and that's the direction they'll keep going for now.

CommSec chief economist Craig James says: "The bottom line is that motorists should expect petrol prices to edge their way higher if the positive mood on financial markets continues.

Filling up the car with petrol is the single biggest weekly purchase for most households, so the future course of petrol prices will be keenly watched by any consumer-dependent business."

But surely not so closely as they're being watched by you. With that in mind, we've found the cars that on current prices can be fuelled for about $1000 in a 15,000km driving year.

These cars get Carsguide's Triple-F rating - they are all family and fuel friendly. We've used the manufacturers' claims for combined conditions, so if you're driving is mainly urban you'll go north of these numbers; if there's a good open road component it will be south.

We've taken broad averages to arrive at our round figures (see below) but they are indicative of what you can achieve with judicious driving and making your visits to the bowser on the days of the lowest pricing. If Toyota is synonymous with sci-fi looking hybrids, its best one is cloaked in anonymity. Indeed it doesn't get much more anonymous than a Camry, the Hybrid version of which looks exactly like the common or garden petrol version.

It shares the good bits - seven airbags, five-star crash rating and a full-size spare wheel - but its economy is staggering: 5.2L/100km versus 7.8L/100km for the petrol Camry.  It's also quieter. In addition to using one-third less fuel, it costs $130 for each of the five services for the first four years or 75,000km.

The price premium - $1,500 more than an equivalent petrol-only model - might pay off but the Hybrid model can tow only 300kg and the boot is slightly smaller. The top version, with near-Lexus levels of luxury, costs $41,490. In contrast with the gormless i45, Hyundai has done a great deal of local adaptation work on the i40 sedan. Even if the wagon does not yet have its specially-adapted-for-Oz suspension settings, it is a much better proposition than the i45.

That miraculous fuel figure is for the manual, the action of which is a bit like stirring a stick though thick mud. Yet while the auto is claimed to use almost a litre more per 100km, on open road run between Sydney and Brisbane Carsguide recorded only 4.4L/100km.

In any case, the sheer driveability of a diesel combined with a good auto makes it preferable. In solely city duty, the i40 is more likely to use above 8.0L, which is surely still worth it given the diesel's open road flair. 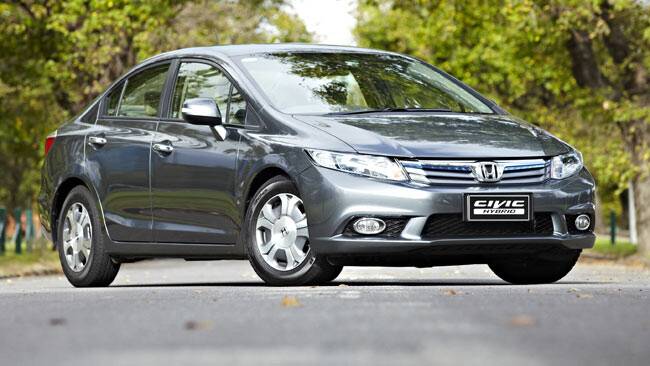 Honda does a couple of obvious hybrids and one that's far less so. And the Civic version is arguably the best of its breed. The new Civic is a big jump from its distinctly average predecessor. It is up on quality and is simply far better to drive.

It uses two power sources - petrol engine and electric motor - but unlike the Camry (and Prius) which can separate the two when needed, in the Civic Hybrid they work in tandem.

This is technically simpler but returns higher fuel figures. The Civic Hybrid gets 4.4L/100km against the Prius's 3.9. Still, it's more spacious than the old model and needs smaller batteries so the boot is bigger.

The rear seats don't fold down to increase luggage space. It gets a five-star crash rating, electronic stability and traction control, brake assist and six airbags, but a space-saver spare. Golf can be played in a range of colours but the most efficient is blue. In VW-speak, it's BlueMotion, the in-house term for those selected models tuned for maximum economy and minimum emissions.

The Golf BlueMotion costs $28,990 $1000 more than the Golf 77TDI that it replaced but comes only with a manual gearbox. But you're prepared the shift for yourself in order to save the planet, aren't you?

A plethora of fuel-miser tech here  low-rolling resistance tyres,  stop-start system, brake energy recuperation, slippery aerodynamics, tall gear ratios and a gearshift prompt indicator  are added to the already frugal 1.6-litre turbo-diesel. It's also a brisk performer with Golf's usual excellent handling and ride comfort. It works as well in city traffic as it does loping along a country road. This slips us well over the grand mark, but torque isn't always cheap especially not 420Nm of it. CX-5s are selling like cold beers at the cricket because they are at least in diesel form very lively, economical and practical wagons.

There's no doubt the CX-5's success is due to it enlarging in the appeal of the Mazda3 hatchback. But it's a better vehicle thanks to the SkyActiv tech that covers body, engine, transmission, suspension and platform. The bi-turbo four-cylinder diesel engine has class leading economy via its six-speed auto, despite the added weight of all-wheel-drive. Compact enough for comfort in city traffic, it's also very roomy with excellent rear seat leg and head space. The cabin could be a bit more stylish, but it’s simple and the controls are easy to operate. The rear seats split and fold flat. On the road the diesel version slaughters the petrol model.

In any guise the Fiesta is well made, affordable and a driver's delight. As a diesel it's also lean running. Made in Thailand, it's big on value. The 88kW/200Nm make this lightweight city car something of a hot hatch, with steering and handling to match.

As with other diesels originally derived from Europe, you have to change gear for yourself, though with the arrival of the next EcoBoost petrol engines next year, Ford's excellent twin clutch automatic could become available. Sedan and hatch are identically priced.

Though the five door brings the extra load flexibility of its ilk, the sedan's boot approaches that of the next class up in terms of capacity. It'll swallow a monthly grocery shop all right. The diesel is specially calibrated for maximum fuel efficiency and features a coated particulate filter to keep emissions low. The Zetec spec, at $23,490, is worth the extra spend.

Lowest price, based on 133 car listings in the last 6 months

Mazda CX-5 Toyota RAV4 Toyota Corolla Honda CR-V
Disclaimer: The pricing information shown in the editorial content (Review Prices) is to be used as a guide only and is based on information provided to Carsguide Autotrader Media Solutions Pty Ltd (Carsguide) both by third party sources and the car manufacturer at the time of publication. The Review Prices were correct at the time of publication.  Carsguide does not warrant or represent that the information is accurate, reliable, complete, current or suitable for any particular purpose. You should not use or rely upon this information without conducting an independent assessment and valuation of the vehicle.