Switzerland is car-making neutral ground and has little vehicle industry of its own. But its annual showcase has a reputation as the "designer" show, where the elite brands put their best ideas on display and the minor players can share the limelight. Volvo has been treading water on vehicle development and a clear strategic direction has yet to emerge after its takeover by China's Geely two years ago.

Its first new product since then still owes a lot to previous parent Ford, with parts of the V40 traceable to the Focus.

But like the Mercedes A-Class, it tackles the booming segment of premium compact hatchbacks and is expected to add 100,000 sales a year. Volvo chief Stefan Jacoby says it sets new standards in the segment, with features trickling down from its larger cars. These include City Safety, a collision avoidance system that can prevent a rear-ender at up to 50km/h, and the headline feature, the world's first pedestrian airbag, which deploys from the rear edge of the bonnet.

"The car that rescued Porsche'' is not over-stating the significance of the Boxster, its little mid-engined roadster, which troubled brand purists when it appeared in the 1990s but undoubtedly brought the brand back from the financial precipice.

Pictures of the heavily restyled new car have been around for a while but Porsche saved the real thing for Geneva.

It shares many of its innovations with the 911, and Porsche will be rolling out variants of these two models for years to come. Lighter than before despite a longer wheelbase and wider track, two flat-six engines are offered from the outset: a 195kW 2.7-litre or 232kW 3.4-litre in the Boxster S. Its bound to better than the last one, and that's still the benchmark in this category.

Mercedes-Benz has had mixed fortunes with small cars. Its previous A and B-Class were the Tweedledum and Tweedledee of a segment that contained cars such as the Audi A3 and BMW 1 Series.

Expensive to build and mumsie in their appeal, Mercedes has torn up that approach and started from scratch. The A will be the smallest and least expensive of what will eventually be a five-car line-up in which only the practical mini-bus B is recognisable from before. The premium small car market is running hot and the A will aim to lure anyone shopping with Golf money and above. It's more macho, more premium and ready-fitted with top-shelf equipment such as collision prevention systems. It's also Mercedes biggest roll of the dice since the new M-Class SUV.

Most Ferraris sold are V8s, particularly since it added the entry-level California convertible to its range. Thanks in part to that car, last year production reached a record of 7200, and its margins are the envy of the industry.

But true believers know it's the 12-cylinder cars that are really at the heart of the badge. Last year it replaced its flagship four-seater 12-cylinder and this year it rolls out its two-seater V12 coupe, the F12 Berlinetta. This replaces the six-year old 599 GTB and lifts the bar on performance even further. The F12 is the most powerful road car Ferrari has built, with a new 6.3-litre engine that develops 544kW and can rev to 8700rpm. It propels the F12 to 100km/h in 3.1 seconds and 200km/h in 8.5. Ferrari has been fast-tracking technology recently and the F12 comes with every dynamic trick Ferrari can muster. Nissan's luxury division Infiniti has global ambitions after years establishing a foothold in the US. For its fifth appearance at the Geneva show it rolled out the third in a trio of concepts that demonstrate the evolution of its design thinking. The clunkily named Emerg-e pushes the boundaries on technology and performance.

Its striking silver carbon-fibre body houses lithium ion batteries that power two mid-mounted electric motors. Together they pump out 300kW and can power the car to 100km/h in four seconds. Emerg-e can travel 50km on electricity before a three-cylinder petrol engine fires up and extends its range to almost 500km. Infiniti launches in Australia later this year.

There's long been a gap in the SUV market above the most expensive Range Rovers and Porsche Cayennes that elite makers have been slow to fill. Not any more. In a few weeks, Lamborghini will unveil its extreme offroader, but Bentley has got in first with the EXP 9 F.

Its first experimental, or EXP, car in a decade, the F stands for Falcon, the fastest animal on the planet. Huge and in many people's eyes not the prettiest, it's recognisably a Bentley thanks to its matrix grille, strong haunches and interior heavy with wood and leather.The showcar boasts 23-inch "turbine'' wheels, while under the bonnet is the same 6.0-litre turbo W12 engine that powers Bentley's GT line. Its goal is to set a new pinnacle for the segment, it says, and, despite any production schedule, Bentley left little doubt it was committed to the idea. 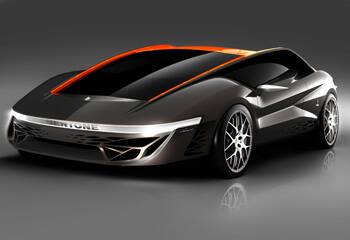 Geneva is where the European tuners, aftermarket specialists and styling houses turn up to impress the industry with their skills.

It's where names such as Pininfarina and Giugiaro, Ruf and EDAG strut their stuff alongside the majors.

One of them, Italian design specialist Bertone, has survived to celebrate 100 years against the odds. Its showcar, named after the "master of Italian style'' Nuccio Bertone, honours that milestone and the determination of his widow to keep the company going.

The car, a dramatic orange-and-grey wedge with a mid-mounted 4.3-litre V8, references famous concepts from Bertone's past, such as the Lancia Stratos Zero of 1970. You can't see out the back, so a camera feeds the view on to an LED-screen-virtual-rear-window. It's unlikely to go into production, but shows there's life in Bertone yet. What does it feel like to have the wind in your hair at 300km/h? If you're the one with more than E2 million ($2.5m) to spend on the Aventador J, then you'll find out. Only one will be built, and even by Lamborghini's extreme standards this is an uncompromising set of wheels.

It starts life as the Aventador, Lamborghini's new carbon-fibre mid-engined V12 supercar, and then doubles down. It removes the roof and windscreen and you can forget about satnav or a radio. It's unlikely you'll be able to hear much, anyway, apart from the engine because the cover has gone, replaced by a carbon-fibre lattice. Underneath is the same 6.5-litre 515kW V12 that propels the Aventador, but with less weight to shift. Lamborghini doesn't say how fast it is, but it does refer to the driver as a "pilot''. Almost four years since it was taken over by Indian giant Tata, Jaguar Land Rover really is hitting its straps. Profits exceeded pound stg. 1 billion ($1.48bn) last year for the first time, it's pumping money into R&D and creating 4000 jobs. Plans are also afoot to expand production into India, China and Brazil.

One reason: in the Evoque luxury SUV it has a phenomenal hit on its hands. Evoque's success hinges on its striking design and Land Rover takes the idea further in its Geneva showcar, which is a study for an open-top version. Officially designed to "gauge reaction'', it will certainly get made if JLR has an assembly line spare

Skoda’s smallest car is no longer its most affordable, as the Czech...

As the pandemic, the war in Ukraine and shipping issues continue to restrict...

Could this new Toyota save the sedan in Australia?

Toyota is prepping to reveal a new-generation Crown in the coming months, and...