Mercedes-Benz has always enjoyed a good reputation for prestige, quality, refinement and reliability in this country; it was one that was, and still is, well earned. The problem for most of us is that the price that came with it was way out of reach.

That was not only an issue for those of us who lusted after a 'Benz, but couldn't afford one, it was also an issue for the company if it was to build its sales in this part of the world. It had a good slice of the big-dollar prestige market, but that only got it so far; if it wanted to grow its sales substantially it had to appeal to buyers on a more limited budget. In short it had to take the three-pointed star to the 'burbs.

The answer was the 190E and it was pitched at the young professional who couldn't wait until later in life to drive a 'Benz. That same quality, refinement, reliability and prestige is now available to the used car buyer at a very affordable price.

The biggest problem Mercedes had when introducing the 'budget 'Benz' was to avoid cheapening the brand in the eyes of its traditional buyers. It was a major issue for both the company and those buyers who were of the mind the company was abandoning the very things that made it what it was. The 190E was the first move Mercedes made into the sub-compact market that was then dominated by the BMW 3-Series. It was immediately successful being voted 'European Car of the Year'.

At the time it was regarded as a radical departure from what had come to be accepted as the 'Benz norm. It had a rather edgy look, with sharp lines, and a high boot line and tapered rear section, both of which were driven largely by the need for fuel economy. The Mercedes driver felt right at home at the wheel of the 190E, the dash layout was like the rest of the range, the seat was firm and flat like those in the bigger 'Benzes, the fabrics and fittings were also familiar.

There was generous accommodation inside and the boot was of a good, usable size. Underneath the suspension was conventional with MacPherson Struts at the front and a five-link independent arrangement at the rear. The steering was power-assisted recirculating ball, while the brakes were a combination of ventilated discs at the front and solid discs at the rear. ABS became standard in 1989. here were a number of engines used at various times in the life of the 190E.

While the 190E was aimed at budget conscious buyers it still featured air, power windows and a radio/cassette sound system. Later models, after 1990, generally also had central locking.

The 190E is generally robust and reliable, little of a significant nature goes wrong with them. The body is strong and doesn't suffer from rust to any degree; the paint quality is also of a good standard such that they still sparkle if looked after. Inside, it had a high standard of fit and finish and the hardware stands up well.

Under the bonnet the early cars had a single row timing chain, later ones a double row that is better over the long term. Listen for any signs of a rattle that might suggest a worn timing chain, particularly in the earlier cars with the single row chain. It's most important to check the corrosion inhibitor that has been used; the correct inhibitor will mean trouble free running; an incorrect inhibitor will mean expensive trouble in the form of a corroded cylinder head.

Check under the intake manifold for a possible oil leak from the cylinder head gasket. It's not uncommon to find a leak, but it's usually nothing to be overly concerned about. Underneath the front suspension stands up quite well, it's worth checking for wear in the bushes; more importantly it's worth checking for wear in the rear suspension bushes, which can affect the handling of the car. Check for a service record to make sure the oil has been regularly changed, as well as important items like the coolant.

The 190E was no fireball on the road, it was lethargic at best, but its saving grace was that it was quite economical. The ride was smooth and comfortable; it soaked up the bumps well and isolated those in the cabin from most of the nasties underneath. It also handled with aplomb; a natural understeerer, it was a safe and sound driver. Today, it's important to check for wear in the rear suspension bushes. Wear there can result in the rear trying to steer the car in a rather unsettling way. Worn bushes can be replaced quite cheaply if needed.

No 190E had airbags, owners had to rely on the renowned strength and integrity of the 'Benz body. ABS braking was standard on most models, the entry-level model between 1991 and 1994 being the one to miss out on this most important safety feature. Buying an old car today it's worth inspecting the seat belts for wear and tear, and considering replacing them.

Tasmanian Anthony Williams has driven Holdens, Hondas, BMWs, Nissans and Toyotas over the years, but all of them pale in comparison with his 1985 190E. It still rides and handles smoothly and when he closes the door there's still the sold 'thunk' that spells quality. So reliable has it been that fitting new brake hoses recently was the first time he'd had to spend anything over and above the normal costs associated with running and maintenance.

Quality build is shining through in later life with the compact 'Benz.

View all Mercedes-Benz 190 pricing and specifications 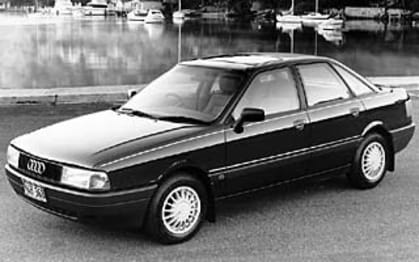 Mercedes-Benz 190 cars for sale
View cars for sale
Disclaimer: The pricing information shown in the editorial content (Review Prices) is to be used as a guide only and is based on information provided to Carsguide Autotrader Media Solutions Pty Ltd (Carsguide) both by third party sources and the car manufacturer at the time of publication. The Review Prices were correct at the time of publication.  Carsguide does not warrant or represent that the information is accurate, reliable, complete, current or suitable for any particular purpose. You should not use or rely upon this information without conducting an independent assessment and valuation of the vehicle.