Toyota's LandCruiser is a genuine 4WD, not just a people mover dressed up to look tough, but which is nothing more than a car underneath that supposedly rugged body.

Highly capable off-road, the big LandCruiser is a longtime favourite with those on the land, in the mines or wanting a hard working tow vehicle.

Cruiser has seating for up to eight people, though it is best if the occupants of the rearmost, fold-down seats aren't over large. With all passenger seats in place luggage room becomes relatively restricted.

Toyota LandCruiser is unashamedly a large vehicle and can be a real handful at times in tight suburban running, particularly in undercover carparks. It’s not only the size of the LandCruiser, but also its large turning circle, that can cause hassles. It has been improved over the years.

But try one for yourself if you've never experienced the potential parking hassles. Despite this, quite a few are used as family wagons, thanks to the spacious cabin and big luggage area.

The LandCruiser has been around for years, but really took off in the sales race with the introduction of the 80-Series in 1990. It was replaced in March 1998 by the 100-Series then the 200-Series arrived in November 2007.

LandCruiser 200 is a major evolution of the 100 Series rather than a completely new model. Its styling is slightly softer than that of the 100, but its genuine 4WD capability remains under that smoother skin.

The LandCruiser 70-Series workhorse and LandCruiser Prado share little in common with the 80, 100 and 200, so will be the subject of separate articles. The added refinement and comfort of the 80-Series compared with its truck-like ancestors made it easier to live with, but even the 80 is getting on in years now so be sure of its condition before handing over the folding stuff.

The LandCruiser is relatively simple for the inexperienced owner to take into the bush. Naturally with all the usual provisos of preparation and driver knowledge that apply to all who drive in off-road conditions. Interestingly, the LandCruiser 100-Series reverted to part-time 4WD in its more basic models.

Most engines on used LandCruisers are straight sixes, though V8s became more common in later years. The petrol unit was originally a somewhat ancient 4.0-litre six-cylinder unit that was thirsty and not particularly quick.

A 4.5-litre, twin-cam, multi valve engine was installed in the topline models late in 1992 and subsequently spread to the rest of the petrol range. It’s a modern unit with tremendous torque and impressive smoothness.

A petrol V8 of 4.7-litre capacity, as used in the Lexus LX470, was offered as an option in the LandCruiser 100-Series from 1998 until 2000. It's quite thirsty, but beautifully smooth and torquey.

Diesel sixes are relatively common on older 80-Series and came with displacements of 4.0 and 4.2 litres. From 1990 the 4.2 litre diesel used a single overhead camshaft and two valves per cylinder.

In 1995 it received a four-valve cylinder head, though it still had a single camshaft. Much better is the 4.5-litre V8 turbo-diesel used in the LC200 – it's reasonably economical, smooth and provides plenty of grunt. The turbo-diesel V8s are big grunt powerplants, making them particularly suited to heavy-duty towing. Five-speed manual gearboxes are offered in some LandCruisers, but most later models use automatic transmissions, with four speeds in the 80 series.

There are five forward speeds in the 100 series, and either five or six ratios in the LC200 depending on the model.

The LandCruiser has plenty of underbonnet and under-vehicle space so the knowledgeable home mechanic can do a lot of their own repairs.

There are Toyota dealers in all areas of Australia, thanks to the company arguably having the most widespread of all networks.

Servicing and spare parts are generally reasonably priced, though some parts cost a lot more than they should. Remember that these are heavy-duty, commercially-oriented vehicles so even things like tyres can cost considerably more than they do for a passenger car.

Insurance is unlikely to cause real hassles as the working nature of the vehicle means most companies have favourable experiences with the vehicle, letting them keep prices relatively low.

LandCruisers that have had severe off-road use – and plenty have – will probably have underbody, door-sill and bumper corner damage. Even those which have only had gentle use away from sealed roads are likely to have scratches in the paint on the doors.

Look for dust in the cabin and boot. This may be caused by windows-down driving, but could also mean leaks around the door seals. Maybe even a twisted chassis due to off-road damage and/or a crash.

Be wary of the engine’s condition if it has done harsh off-road driving and/or heavy-duty towing. Engines are generally long lasting but watch for a smoking exhaust when the engine is under load that may indicate it is near the end of its life. An oil light that’s slow to go out when the engine is started is another indication of engine wear.

Manual gearboxes on older models are relatively heavy, even when new. The 100 Series and 200 Series are better than the older units. Crunching during downchanges to second and first gears is usually the first sign of problems. Transfer boxes are often stiff in operation even when they are working correctly. Be wary of one that’s too tight as they can be expensive to repair.

Check for signs of salty sand as it can cause real rust troubles. Look for rust in the floor, especially if the Cruiser has had a lot of beach use. Have a professional inspector follow up your initial examination as a hard used example could cost big bucks to be put back together again.

While we usually think of off-road use being tough on 4WDs, life in the suburbs with a mob of rough kids beating up the back area isn’t all that easy either. 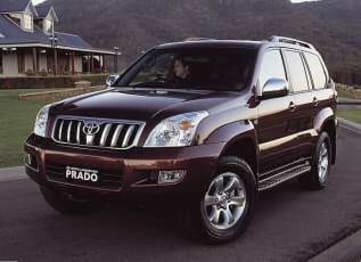 Toyota Land Cruiser Prado Nissan Patrol Ford Ranger Toyota HiLux
Disclaimer: The pricing information shown in the editorial content (Review Prices) is to be used as a guide only and is based on information provided to Carsguide Autotrader Media Solutions Pty Ltd (Carsguide) both by third party sources and the car manufacturer at the time of publication. The Review Prices were correct at the time of publication.  Carsguide does not warrant or represent that the information is accurate, reliable, complete, current or suitable for any particular purpose. You should not use or rely upon this information without conducting an independent assessment and valuation of the vehicle.