The Porsche 911 is a triumph of persistence over perfection. By rights it shouldn’t have worked at all with its air-cooled engine slung out behind the rear axle the way it was, but determined development by Porsche over many years turned the ugly duckling into a graceful swan.

Ferdinand Porsche championed the concept of air-cooled rear engines slung out behind the rear axle in a way that led to a pendulum effect when cornering that made his famous VW Beetle and the early Porsches a real handful if pushed to their handling limits.

The Porsche family stuck true to Ferdinand’s formula and with endless refinement and improvements in technology made the iconic 911 sports car a true classic revered by petrolheads all round the world.

The 911 replaced the 356 in 1964 and the process of evolution was well underway. The 911 3.2 was one of the early signs of what was to come from Porsche; it was bolder, more aggressive and more powerful than the more modest models it followed.

Now, almost 25 years old it’s one of the most affordable ways of acquiring a classic Porsche badge.

In the 1980s Porsche enthusiasts feared the 911 would be killed off by a management determined to enter the mainstream with a series of new models with a water-cooled engine at the front and refined handling of the sort never thought possible with a Porsche badge.

The 924 was a rather insipid attempt at appealing to the masses, the 944 was better, while the 928 was a much-underrated supercar. None, however, appealed to the die-hard Porsche enthusiast who couldn’t accept anything but a 911 as a real Porsche.

While those front engined models have gone to the great automotive graveyard in the sky the 911 has gone from strength to strength and the company has succeeded beyond even the wildest dreams of the management in charge in 1984 when the 911 3.2 was released.

Even today’s 911, a vastly different car to the original 911, has a family resemblance that is unmistakable. Every 911 has retained the 911 ‘look’ even when it’s been heavily altered.

The 3.2 looked like a 911, but was subtly different to the cars that went before it. Its lines were bolder than those of its predecessors, and you could have it with the wide body of the Turbo for the ‘Turbo look’.

Power came from a 3.2-litre version of the flat six-cylinder engine that was so familiar in the back of previous 911s. It had electronic multi-point fuel injection and electronic engine management and produced a healthy 170 kW and 284 Nm when at its peak. Coupled to a five-speed manual — there was no auto option — it was capable of racing from zero to 100 km/h in 6.1 seconds and had a top speed of 245 km/h.

By 1985 exhaust emission limits were having an effect and it was fitted with an air pump. A year later, when Australia went to unleaded fuel the air pump was deleted, but it got a catalytic converter and was detuned to 155 kW.

A new stronger gearbox came in 1987, which delivered smoother shifting than the rather stiff shifting Porsche ’box it replaced. At the same time the clutch was changed to hydraulic actuation and the whole gear changing experience was changed for the better. No longer did you need massive muscles to swap cogs, it was a much lighter and more pleasant experience.

The following year, 1988, saw engine power boosted to 160 kW with the availability of 95 octane unleaded fuel. Porsche offered the 911 3.2 in a choice of three body styles, coupe, cabriolet and Targa, and in 1985 made the wide body available. In 1987 all were fitted with front spoilers and the wild whale tail rear spoiler.

Porsches are generally bulletproof, not a lot goes wrong with them even when they get up in the kays as many of them now are. Watch for smoke from the tailpipe under acceleration, which can mean worn bores and oil is getting past the rings. Porsche introduced hydraulic cam timing chain tensioners on the 3.2 and these are much more reliable.

The Porsche interior, like all European interiors of the time, suffers under the Aussie sun, and this can lead to cracked and buckled plastics and torn trim. Cabriolets and Targas are more prone to interior damage because of the greater exposure to the sun.

It’s important with all cars of the age of the 3.2 to carefully check for evidence of crash damage. The odds of any car of that age being in a crash are high, so it’s worth spending extra time making a thorough check.

Built before the advent of airbags and the like the 3.2 relied on its chassis to get out of trouble. The brakes were powerful, without ABS of course, and stopped the car efficiently. Porsche handling was always the subject of much discussion, and it’s worth getting some experience behind the wheel before pushing the 911 to its limits.

It’s arguable that a Porsche driver is overly concerned about fuel economy. Most only drive their cars on sunny Sundays and then they rarely go far so the cost of their fun motoring isn’t very high. For what it’s worth the 911 3.2 should get 11-13 L/100 km on average driving, but push it hard and that will markedly increase.

THE BOTTOM LINE
It’s almost 25 years old, but the 911 3.2 is an affordable classic that still looks as fresh as tomorrow.

View all Porsche 911 pricing and specifications 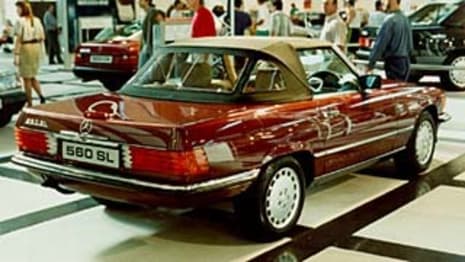 BMW M3 BMW M4
Disclaimer: The pricing information shown in the editorial content (Review Prices) is to be used as a guide only and is based on information provided to Carsguide Autotrader Media Solutions Pty Ltd (Carsguide) both by third party sources and the car manufacturer at the time of publication. The Review Prices were correct at the time of publication.  Carsguide does not warrant or represent that the information is accurate, reliable, complete, current or suitable for any particular purpose. You should not use or rely upon this information without conducting an independent assessment and valuation of the vehicle.