A IS FOR Awesome

Concrete, carnage and four drivers vying for the V8 Supercars championship; it doesn't get much better. In fact this year's grand finale could prove better than Bathurst with the tightest championship in the sport's history to be decided on the sport's tightest track. Holden's Craig Lowndes and Jamie Whincup will square off against Ford duo Mark Winterbottom and Will Davison in a bare knuckle fight on the streets of Sydney. The concrete walls will claim at least one of the four.

B is for Betty

It is also for Billionare, Bogan and Bloody good chick. You will see a lot of Betty Klimenko this weekend, whether you are at the track or at home watching TV. She isn't hard to miss with her purple hair and tattoos. You could mistake her for a V8 fan, but she is the owner of the new Mercedes team Erebus V8 and the heiress to the Westfield's empire.

C is for Champion

After 11 months and 34 races, the championship, which began in Adelaide before stopping off in every state in Australia plus a trip to Texas and another over the ditch, will be decided on the streets of Sydney. There have been a staggering 17 different winners in a season that saw all new cars and two new manufacturers level the field. But there can only be one champion. Will it be Lowndes, Whincup, Winterbottom or Davison? Go on… be brave. Make a prediction. 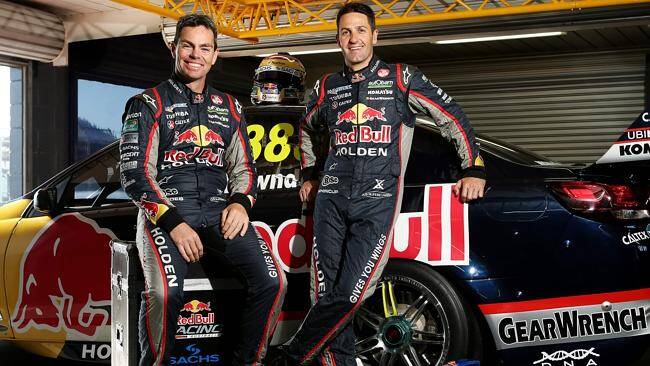 Teammates Craig Lowndes and Jamie Whincup will go head-to-head for the championship.

D is for Distance

They call it the Sydney 500 for a reason. Yep the drivers will race 500km this weekend. There are two 250km races, one on Saturday and one on Sunday. Both races are worth 150 points each with, 300 points on the offering if you are good enough to win both races. But you have more chance of picking up a grid girl than seeing a driver win them both. It has never happened and probably won't because of this tracks brutality.

E is for Engine

Shoppers at Paddy Markets, Rhodes IKEA, and DFO would be smart to wear earmuffs this weekend because the cracking thunder made by the 28 V8 Supercars will shake Sydney's West. These 5.0, 485kw beast produce up to 650 brake horse power and boy do they make a noise. They are worth $100,000 alone and send pieces of carbon fibre, steel and plastic, flying down the road - and sometimes into walls - at speeds of up to 300kph.

F is for Ford

You can thank a bloke called Henry for giving you your Ford. They used to only come in black, but you can get them in whatever colour you like these days. Unfortunately you can't get yourself a Ford V8 Supercar, and soon you won't even be able to get yourself a Ford Falcon. But you can watch a bloke called Frosty do his bit to keep the legend alive when he tries to rope in bull's Lowndes and Whincup. G is for Grid Girls

This is the only place in Sydney that it is OK to stare at a glamour's bum. You can even take pictures and talk to them without being arrested.

H is for Holden

Fancy a pie, a beer… maybe a snag or a steak? Well if you don't know it already, you are Holden fan. Get yourself a Commodore, for heaven sake not a Barina, and drive it down to Homebush this weekend to worship Lowndsey with your army of friends.

I is for Idiots

That is the word drivers have been using to describe other drivers over the past couple of rounds with the championship contenders driving like mad men in a bid to snatch the crown. They have been bumping, barging and biffing in this bare-knuckle championship fight. J is for Jamie

Jamie Whincup is the greatest driver of his generation. He is aiming to land a record equalling 5th title this weekend and become a legend just like Dick Johnson and Mark Skaife.

K is for Kerb

Those red and white bumps that line the track are called Kerbs. They are designed to be driven around, but these V8 boys like to hit them as hard as they can and turn their cars into planes. Get your camera out.

He is kind of a big deal. Worshipped like Peter Brock was, Lowndsey is looking to fend of his teammate and protect his legacy by winning his first title in 14 years. Nissan drivers Michael Caruso and James Moffat in action at the Gold Coast 600.

M is for Mercedes

There are four of them on the grid. They look good but don't expect much from them this weekend. They will be all the better for it next year.

N is for Nissan

Don't be surprised to see a Sushi Train or two at Homebush this weekend. Several high flying Japanese Nissan executives will be in Sydney to see the four Altima's make their Homebush debut. Will Godzilla roar?

O is for Ouch

Spare a thought for the drivers. The concrete might hurt, but the heat is the real killer. Sydney is the hottest race on the calendar with the December heat, concrete walls and homebush humidity sending temperatures near 70 degrees inside the cars. These guys are tough. Pit stops will be vital to the championship contenders hopes of victory.

P is for Pitstop

A race can be won or lost in the pits. Don't be surprised if a threaded wheel nut costs someone a championship.

Q is for Queuing

This is a horror scenario but one that is part of the sport. With only one pit bay, a teammate will be forced to queue behind the other in the pits if they both elect to come in for a stop during a safety car. They both need to come in because the 30 seconds or so they lose queuing is less than they will loss if they stay out. The car with track position gets priority so expect to see teammates going at in qualifying. This scenario will ruin it for either Lowndes or Whincup.

R is for Risky

Go to soft and get passed, go to hard and crash into a wall. One slip up on this concrete lined track will finish you. Drivers must find the fine balance between risk and reward.

S is for Sydney

This is our town and our race. Get out and enjoy an event that brings in more people than the NRL grand final.

T is for Tyres

Those bits of black rubber could decide the race. Driver must nurse them at all times. Ask too much from them and the road will tear them apart.

U is for Underdog

Will Davison would have no hope of winning the title from 4th at any other track. But because all three above him are a chance of crashing out, the other Ford driver could just do Steve Bradbury proud.

This is what it is all about. Big engines, big noise and big fun.

W is for Winterbottom

He is Sydney's man. Bred in Doonside, "Frosty" is looking to upset the Bulls and steak his first championship. The Bathurst winner is also the newest ladies man after pulling off his shirt for a photo and revealing his (V) 6 pack.

X is for X-Factor

If you are being dragged along by your husband this could mean the singer that is belting out the anthem. For everyone else it is the rain. We know the weather can change in and instant and all bets are off if it belts down.

This is what you will here if you ask a driver for a photo or a signature. Not like blokes from other sporting codes.

Z is for Zebra Crossing

Stay away from them this weekend if you happen to be anywhere near Sydney Olympic Park.

Will Hyundai's first dual-cab ute be an instant hit? Lessons the brand can learn from the Sonata, Excel and Genesis GV80

If you're old enough you might remember the very first Hyundai Sonata to land...

Can Kia overtake Ford and Mitsubishi? New Sportage, Stonic, Sorento Hybrid and e-Niro could propel brand up the sales charts

For those familiar with the story of the Tortoise and the Hare, Kia is a...