Moving large families has always been a problem, until the advent of peoplemovers. The problem was that the first peoplemovers were based on light commercial vans, and as a result lacked the refinement expected of a regular sedan.

That was until the development of purpose built peoplemovers, like the Chrysler Voyager, specifically designed for family use.

The Voyager came here from America, where it was conceived in the early 1980s, via Austria where our right-hand drive versions were built.

It was the most successful peoplemover back home, but by the time it arrived here there were a couple of others, the Toyota Tarago in particular, already on sale and setting the benchmark.

Big families have always faced a transport dilemma. If their numbers exceeded the five a normal family four-door would swallow they either had to have a couple of cars, or leave some unlucky family members at home when they travelled.

The van was the first solution. Early on some dads simply bolted a few extra seats in a delivery van and created their own peoplemovers, then later bought the rather rudimentary offerings of companies that converted vans already in their catalogues, before finally they were liberated by a new generation of vehicles purposely developed for moving people in larger numbers.

The Voyager brought an American solution to the problem when it arrived here in 1987. It had been the most successful peoplemover in its home market, but would face some tough well respected competition here.

The Toyota Tarago was the benchmark at the time, the Honda Odyssey was an acclaimed newcomer, and there were others like the Mazda MPV and Mitsubishi Starwagon to keep the American invader honest.

A common thread running through all was their safety, performance and comfort, all of which were approaching the level carmakers were delivering in their sedan ranges.

Two versions landed here in the first Voyager wave, the short 2878 mm wheelbase SE and a longer 3030 mm wheelbase LE version. Both could carry up to seven adults in a flexible seating arrangement that could be adapted to the need of the day.

The driver and front seat passenger had comfy bucket seats, the three rear most passengers were seated on a broad bench. In between you could have a pair of buckets or a two-seater bench, making up the total of seven.

Being a conventional semi-bonneted configuration instead of the cab-over-engine style of most earlier converted vans it was easier to climb into the cockpit. It was just as easy to climb in the rear seats, through sliding doors on each side.

Once inside it was possible then to move back and forth through the length of the cabin to get access to luggage on the move or settle squabbles that inevitably flare up when kids are confined in a relatively small space for extended periods.

There was also another side to the Voyager that added even further to its flexibility; the rear two rows of seating could be removed by simply unclipping them and rolling them out. They were on wheels, which made handling them quite easy, and they could be stored in the garage when not needed.

It was great when you needed to move furniture, pick up supplies at the local handyman store, or whatever it was you needed to shift.

For small business people or tradies it meant the Voyager could be used as a van during working hours, and quickly converted to family use when the whistle blew.

Chrysler’s designers were so intent on designing a vehicle in which people would spend considerable chunks of their lives they went to some length to make the cabin comfortable with everything you could need on the move.

The seats were comfortable, it had power windows and mirrors, central locking, a tilt adjustable steering column, air-conditioning, cruise control, and an AM/FM radio/cassette sound system. There were lights everywhere, a host of cubby holes for convenient storage, and a dozen cup holders. No one would go thirsty in a Voyager.

In packaging terms the Voyager was tops, but you found fairly ancient foundations when you scratched below the surface. There you found a combination of MacPherson Strut front suspension and a leaf spring beam rear axle, front disc brakes with rear drums, and an overhead valve V6 engine with just two valves per cylinder.

It certainly wasn’t high tech like some of its rivals were, but that didn’t necessarily mean it wouldn’t perform in service.

A smooth four-speed auto trans represented the only trans choice, and a sensible one at that.

American build quality always comes with a question mark. Jeep quality isn’t the greatest, and the Voyager was built by the same company, albeit in Austria.

Unlike the early Jeeps rust doesn’t appear to be a problem with the Voyager with its galvanised body. Paint quality also appears quite good, as it should be to stand up to the tough conditions in the US.

Mechanically the auto gearbox can give problems around the 150,000 km mark, but the rest of the drive train appears relatively bulletproof.

Underneath the suspension is straight forward, look at replacing wheel bearings at 100,000 kays, but otherwise there shouldn’t be much trouble.

Like early Jeeps the interior plastic trim parts are inclined to break, and fall apart, so be prepared to bits and pieces to fail.

Safety was an issue with peoplemovers. Often built on van platforms they weren’t nimble, and didn’t brake or steer particularly well, but that changed with vehicles like the Voyager which were more like cars in their on-road behaviour.

Being a semi-bonneted configuration meant you were protected by front crumple zones in a crash, while airbags provided added protection when things went seriously awry.

The seat belts also featured pretensioners to limit injury in a serious crash.

Drum rear brakes was a throwback to an older time, but the presence of ABS was a positive.

Pamela Kriesl says her family’s 1997/98 Voyager is a lemon, but still says there is no other peoplemover that matches it. It pulled to the left from the moment she took delivery of it, it was difficult to get into reverse gear, and the auto expired at 99,000 km. Add to that problems with the air-conditioning, the cruise control, the headlights, the plastic interior trim parts which she says are extremely brittle, and a large turning circle which makes it hard to park, and you’d reckon she’s right. Against that, however, she says it is beautiful to drive, the ride is wonderful, the power is fabulous, and the fuel economy is great. Despite the long list of problems she says she just loves it.

• good economy and performance from V6

Large roomy transport for seven that can also carry a load of luggage. 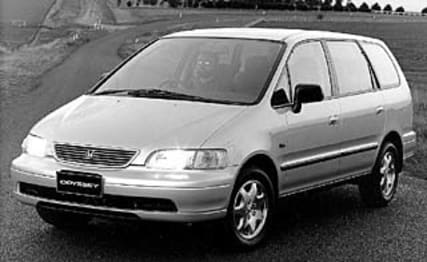 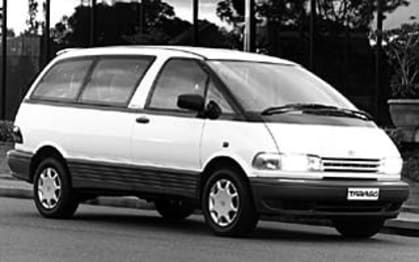 Chrysler Voyager cars for sale
View cars for sale
Disclaimer: The pricing information shown in the editorial content (Review Prices) is to be used as a guide only and is based on information provided to Carsguide Autotrader Media Solutions Pty Ltd (Carsguide) both by third party sources and the car manufacturer at the time of publication. The Review Prices were correct at the time of publication.  Carsguide does not warrant or represent that the information is accurate, reliable, complete, current or suitable for any particular purpose. You should not use or rely upon this information without conducting an independent assessment and valuation of the vehicle.