Best Australian cars of all time

As Australians get ready to line up the sausages on the BBQ for Australia Day, we're looking back at the hey-day of Australian cars - when the Kingswood spawned a TV series and Hey Charger produced a two-finger salute that wasn't going to start a fight.

Ford, Holden and Toyota are the remaining car makers in Australia but Mitsubishi and Chrysler before them also built cars in Australia, with the Adelaide-built R-Series Valiant seen by some as a pivotal car for the Australian industry.

While it only sold just over 1000 cars before it was replaced the S-Series, it boasted a larger, more powerful engine, with comparable fuel consumption and a bigger boot.

Celebrating its 50th anniversary this week, the R-Series was built in Keswick and Mile End before Chrysler opened its Tonsley Park plant in 1964.

Geoff Chase has "sheds full'' of Valiants and has an R-Series six-cylinder as his daily drive car - the 74-year-old from the inner-southern suburbs of Adelaide bought them in the 1960s and has never felt the need to buy anything else.

"I knew the day I bought it new that I wouldn't need another car, the looks caught my eye but it will do anything, go anywhere in Australia, it tows a caravan, I've never needed anything different," he said.

Carsguide chief reporter Paul Gover has put Holden's first Australian car - the 48-215 - in top spot, ahead of Ford's XT Falcon and the 1969 Holden Monaro and the Falcon GT-HO Phase III.

Chrysler's Valiant, the Leyland P76 - "a great car that was badly built" according to Mr Gover - and the Mitsubishi Magna also make his list. The VB, Holden's first Commodore, as well as the Cruze and Ford's ground-breaking Territory SUV round out his top ten.

Adelaide-based author Gavin Farmer has spent much of his life in the automotive industry and has written books on some of the key cars - the Monaro, the Charger and even the ill-fated Leyland P76.

Mr Farmer puts the two current six-cylinder cars from Holden and Ford firmly in the top 10.

"The current VE Commodore and FG Falcon are, to my way of thinking, world class cars - unfortunately politics is getting in the way where they are concerned, but as pieces of engineering and value-for-money, they are world-class," he says.

"The R-Series Valiant should also be up there, it changed the landscape in Australia and pushed Holden and Ford," he said.

Mr Farmer also nominated the Holden Monaro, AU-Series XR and 1960s Falcons as worthy vehicles and gave an honourable mention to two French cars. Politics has changed the automotive industry for the worse, according to the motoring author.

"I have never known Australia to be so bereft of leadership, our tradition has been the Holden/Falcon sized motor car, I personally think we need to put barriers up again to rekindle the Australian industry," he says.

"We're going the same way as the British industry, we're letting the world tell us what to do. I'm disappointed that a fully-imported foreign car is king of the hill," he said.

"The FJ is in some ways probably more important to Australian motoring than the 48-215 - although that started it but the FJ is the car a lot of people would have had new or second-hand,'' he said.

Mr Lombard also said one car that was forgotten by many was the 1936 Chevrolet Sloper, which was sold here with a Holden body. Chrysler and later Mitsubishi claim a place in motoring history, with the R and Series Valiant shaking up the Holden and Ford dominated marketplace.

The Sigma and Magna range should also be recognised as being significant Australian cars - "it started the whole change toward a smaller family car," Mr Lombard said. 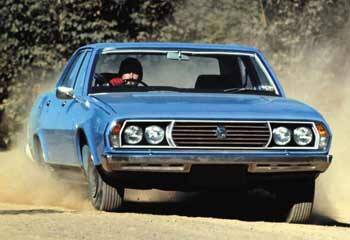 Mazda Australia says it will not abandon affordable model segments as it...

MG Motor Australia has confirmed that supply of the popular MG 3 will remain...

Nissan Australia has released pricing and specifications details for the MY22 X...

HSV VL Group A SS, Tickford TL50 and other Australian classics worth big money...
2022 Subaru WRX Sportswagon in, Levorg out as Japanese brand's performance...
2022 Audi A3 price and features: Australian pricing of new-gen Mercedes-Benz A-...
Kia Australia open to the idea of even longer warranty, but how lengthy will it...