Paramount pictures is using the 2014 Super Bowl to give us our first taste of the upcoming film Transformers: Age of Extinction. The upcoming fourth instalment of the Transformers franchise brings a new cast led by Mark Wahlberg, and new Tranformers too in the form of Dinobots. We last saw Jerry Seinfeld during a Super Bowl battling Jay Leno for Honda NSX keys, but now Seinfeld’s web series ‘Comedians in Cars Getting Coffee’ is doing well enough to warrant its own Big Game ad. Now into its third season, the Super Bowl ad for the show sees Jerry Seinfeld and Jason Alexander reprising their roles of Jerry and George from Seinfeld’s classic 90s sitcom.

Jeep is pretty keen to show off its new Cherokee SUV’s adventure potential, so has created this Big Game ad to tickle at your outdoor heartstrings. Despite its fundamentally road-going Dodge Dart/Alfa Romeo Giulietta-based underpinnings, Jeep’s Super Bowl ad reckons the new Cherokee is the cure for restlessness, and prepared for whatever’s on the other side of the horizon.

Tough guy Willis is doing duty for Honda’s Super Bowl commercial, highlighting that the Japanese carmaker builds more cars with top safety ratings in America than any other brand. To underscore his point, Willis emphasises the importance of the people around you. Friends, family, loved ones, "everyone you care about". They’re not test dummies, he points out. So he wants you to give them a hug. Right now ... go on. 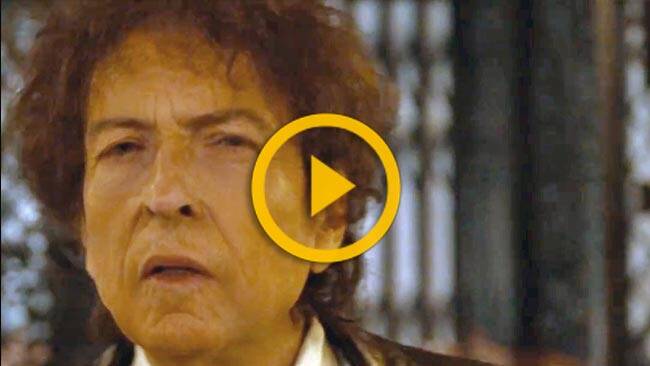 Of all the superstars that would seem an unlikely bet to ever advertise cars, iconic musician Bob Dylan would be the unlikeliest. And yet here he is for the Chrysler 200 sedan at the 2014 Super Bowl, his gravelly tones singing about how well America builds cars, providing a soundtrack for a cavalcade of glorious stars-and-stripes imagery.

Maserati has showcased the launch of the four-door Ghibli sedan with a debut appearance in the world’s biggest advertising slot – the Super Bowl. The footage stars 10-year-old Academy Award-nominated child actress Quvenzhane Wallis from 12 Years A Slave, directed in this piece by David Gordon Green.

Longtime stalwart of The Daily Show and Saturday Night Live, comedian Rob Riggle is performing a bit of transformational magic for Ford during the Super Bowl. The key ad showcases the Ford Fusion sedan, claiming to have double the fuel economy of the average vehicle.

That's the take-off point to a series of magical morphs that show just having the Fusion in your driveway can do wonders for house and yard -- not to forget your wardrobe and pets. Riggle ultimately upgrades himself to Hollywood heartthrob James Franco, and the whole shebang should help put you in the mood for the Fusion's arrival in Australia next year, badged as the 2015 Mondeo mid-sizer.

Jaguar's first Super Bowl teaser shows they've got some top-shelf baddies lined up as part of the 'British Villains' theme to sell the F-Type Coupe. First off the leash is screen and theatre legend Ben Kingsley -- with a shelf of Oscar, Grammy, BAFTA, Golden Globe and SAG awards, but most recently seen as the Mandarin in Iron Man 3. 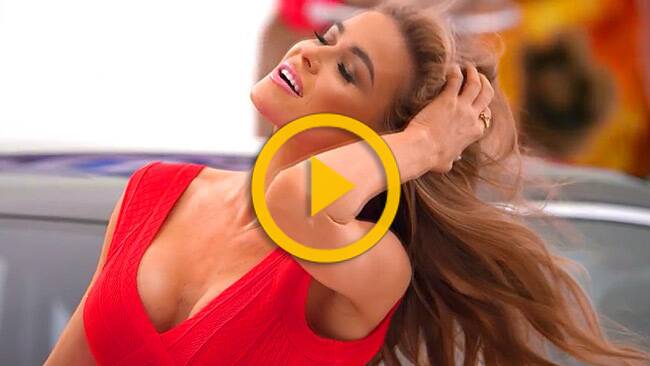 Volkswagen hits all the memes in engineering an algorithm for the perfect Game Day commercial. And apparently, the algorithm requires the integration of glamour model/actress Carmen Electra, puppies, babies, some twerking, a Wang Chung soundtrack and ... well, you've probably seen every highlight of every other ad. It wouldn't be the Super Bowl without an ad featuring race driver Danica Patrick touting for website hosters GoDaddy -- who also sponsored her Nascar Nationwide Series campaign for JR Motorsports. The Game Day commercial shows a lot of Patrick's body sporting a set of pumped muscles that almost shame the bodybuilders racing her to a tanning salon. The Toyota Highlander -- sold here as the Kluger -- has a strong family focus, and the car giant will underscore that by starring the Muppets in its Super Bowl commercial. The teaser video gives a glimpse, with a supporting role from former footballer and lately actor Terry Crews (The Newsroom and Arrested Development). The 'Dad's Sixth Sense' ad shows the parent rescuing his son from a series of falls and mishaps from infancy onwards -- but then the Genesis' auto braking saving him from a crash when he's distracted by a pretty girl during a driving lesson. Audi has created a miniature mongrel with a savage streak for their Super Bowl ad. The footage shows a couple trying to choose between a chihuahua and a doberman as a pet, and deciding to breed them together as a -- wait for it -- doberhuahua. Volkswagen is aiming to tout durability and reliability in its Super Bowl, which features a father telling his daughter that every time a VW hits 100,000 miles (160,000km) an engineer back in Germany sprouts wings. While the appendages might usually be better worn by the Victoria's Secret 'Angel' models, the addition of the wings offers the opportunity for a few sight gags. It's good to be bad, Jaguar claims. And the luxury brand is pushing that theme for their Super Bowl ads, featuring a line-up of British villains. We've already seen Ben Kingsley in the main teaser, and now we get Tom Hiddleston in a second spot. Most recently seen playing Loki in the films Thor, The Avengers, and Thor: The Dark World. Continuing the bad boy theme to showcase the F-Type Coupe, Jaguar has revealed the full 60-second commercial that will screen at the Super Bowl. Shot in a mock thriller style, with moody lighting and all the super-villain props of planes, attractive assistants -- and of course the F-Type -- the ad takes a tongue-in-cheek approach, and comes off being very engaging as a result. Get ready to see a whole lot more of actor Terry Crews than you ever bargained for. The latest teaser for Toyota's Super Bowl ad shows the sports star turned movie star without a shirt and demonstrating muscle control with his pecs in time to the cheesy jingle. The theme for the Hyundai Elantra Super Bowl commercial is 'Nice' and actor Johnny Galecki is almost typecast in it, after playing nice guys on both The Big Bang Theory (Leonard) and Roseanne (David). In the footage, Galecki tries to chat up a woman who pulls up beside him in a matching Elantra, pointing out all the nice features of the car -- and getting some nice brush-offs in return.

Kia plugs into The Matrix for 2014 Super Bowl 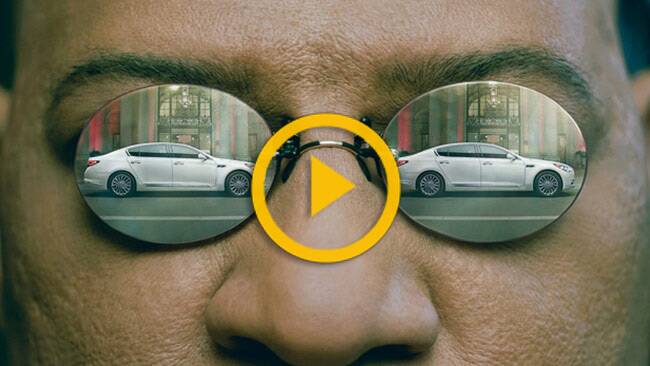 The 60-second commercial, scheduled to run during the 2014 Super Bowl prime advertising slot, will see Fishburne as Morpheus offering the 'red vs blue' choice. In the movie it was red and blue pills, one of which would let you stumble on in an illusory world while the other would awaken you to reality. For the Super Bowl ad, promoting the Kia K900 flagship launching in overseas markets, Morpheus offers people the chance to choose either a red or blue key.

Toyota is aiming for catchy family fun with its 60-second Super Bowl, in which actor Terry Crews is piloting his new Highlander -- sold here as the Kluger -- along a remote highway, when he stops to help out after spotting a broken-down, brightly painted bus. Within seconds, his SUV is crammed with Muppets: Animal stuffing his drum kit into the cargo area and Dr Teeth hijacking the driver's seat to steer off into a series of adventures, all singing an annoyingly catchy jingle perfectly designed to stick itself limpet-like to the viewer's brain. In the ad, titled Romance, we get to meet "a man ... a man and his truck ... and a very eligible bachelor" who just happens to be a prize bull. It goes on in the vein of "bated breath and lonely hearts" -- you get the picture -- as the driver hauls his new bull through the US landscape with Hot Chocolate's 'You Sexy Thing' in the background.

The ad that shocked the Super Bowl

Created for the Utah Department of Transportation (UDOT) as part of its Zero Fatalities campaign, The Twist starts off with an image of a young boy curled up in a car seat, and a voiceover that starts off "Sam looks like he's sleeping..." but as the camera zooms out we see that he's been killed in a car crash, not by the crash itself but by being unbuckled and flying into the back of the seat in front of him.

Confectionary brand M&M’s has also delivered a Super Bowl treat this week, with a new ad for the colourful button-shaped candies. Yellow – the peanut M&M character – is unknowingly taken captive by Russian underworld types, in the boot of an oh-so Russian baddie black S-Class Mercedes-Benz.

Genesis has lifted the lid on its flagship G90 sedan that will sit above the...

BMW has lifted the lid on the most powerful M car to date, and it's not a coupe...

Genesis Australia has added a second body-style to the first-generation G70 mid...