The i40 wagon debuted at the Geneva Motor Show in March and Hershman says it will arrive here later this year.
Mark Hinchliffe
CarsGuide
9 May 2011 • 2 min read

However, Hyundai's new i40 sedan hits the world stage next week almost three months after the Korean company debuted its i40 estate (wagon).

"In Europe the wagon represents a very strong percentage of sales in the D segment, so Hyundai decided to engineer the wagon variant first,'' he says.

The i40 wagon debuted at the Geneva Motor Show in March and Hershman says it will arrive here later this year.

The mid-sized i40 sedan version will debut at the Barcelona Motor Show next week, (MAY 12) but there is no confirmation it will come to Australia. Marketing director Oliver Mann says they are still reviewing the business case for the i40 sedan.

"We are hoping to make a decision later in the year," he says. The i40 has been designed and engineered at Hyundai's research and development centre in Rüsselsheim, Germany.

The drawings released by Hyundai show a handsome vehicle with heavily creased accent lines that swoop along the sides for a dramatic effect. Hyundai refers to the design DNA as ``fluidic sculpture'' which was introduced on the ix-onic concept car at the 2009 Geneva Motor Show.

Chief designer Thomas Burkle says they wanted to move away from the three-box saloon design. 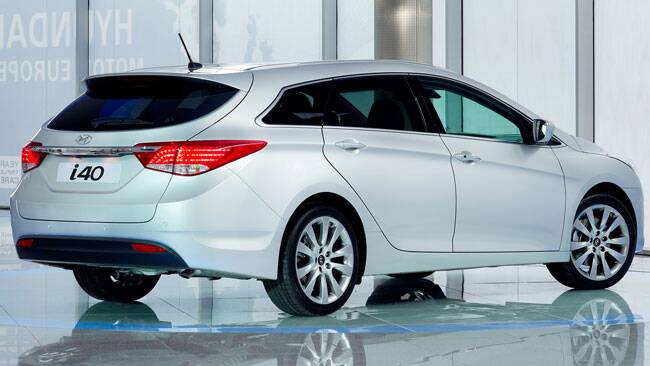 "By sculpting a low, elongated roof line, we've given the i40 saloon a striking coupe-like silhouette,'' he says.

The mid-sized car has a 2.77m wheelbase and Burkle says the interior has been shaped ``to deliver practicality and comfort to the driver and passengers in a high-quality package''.

END_OF_DOCUMENT_TOKEN_TO_BE_REPLACED

Hyundai I40 cars for sale