The Holden Trax looks good and has a funky name that will resonate with 20-something shoppers.
Paul Gover
CarsGuide
26 Aug 2013 • 4 min read

More and more people are downsizing vehicles and that means even SUVs are getting smaller and more urban focused. The original tiddler, the Suzuki Jimny, is now ridiculously outdated and silly costly at $20,490, but the newly arrived Holden Trax and a run of others are providing good driving at prices close to the small cars that are providing their basics. They're all about the city and suburbs, which means front-wheel drive mostly instead of the all-wheel drive needed for Outback work.

The current sales leader is the Hyundai ix35, based on deliveries of 11,021 cars in Australia through July, but things are changing on both size and refinement. We're also looking at a class where the Trax slides in below Holden's family-focused Captiva couple, the 5 and 7, and is more likely to be shopped against a Subaru XV or a Mitsubishi ASX or a Nissan Dualis. Even the ix35 is bigger and more adult than most compact shoppers want, and fits more easily into the bigger family class with its Kia Sportage clone, the Honda CR-V and Toyota RAV4.

But back to the Trax, which looks good and has a funky name that will resonate with 20-something shoppers, as well as the Holden badge that works for security and that ‘Aussie’ tick. It's priced from $23,490 and makes the grade with everything from five-star safety to a reversing camera across the line, a 1.8-litre engine and an infotainment system with a seven-inch touch screen and imbedded Pandora, Tune-In Radio and the potential at extra cost for a navigation app called BringGo.

If you're wondering about the basics of the Trax, they are shared with the Barina hatch, but the SUV twist means its similar in size to a Nissan Dualis and there has been plenty of local testing and development work to ensure it drives like a Holden.

It's the Dualis that usually gets the Carsguide tick for people who want a small SUV that's really just a high-riding hatchback, although the Subaru XV looks best and would do much better if it had a worthwhile boot and a CVT transmission that did a better job with its 2-litre engine. As for the ASX, it's not as refined as its rivals and let's leave it at that.

We also like the new Ford Kuga, particularly as a drive, although it's also rated in the bigger class where the Mazda CX-5 sets the pace on class and sales, with 11,731 deliveries to the end of July. There is plenty of upside in the Trax and Holden is predicting big things as it finally gets the baby SUV it has needed in recent years. Now we, and they, are just waiting for the full-sized family hauler that will eventually roll in above the Captiva. A funky new SUV contender that's going to do well in Australia, especially as it's a fun drive and reflects the improving quality of Holden's cars from Korea. 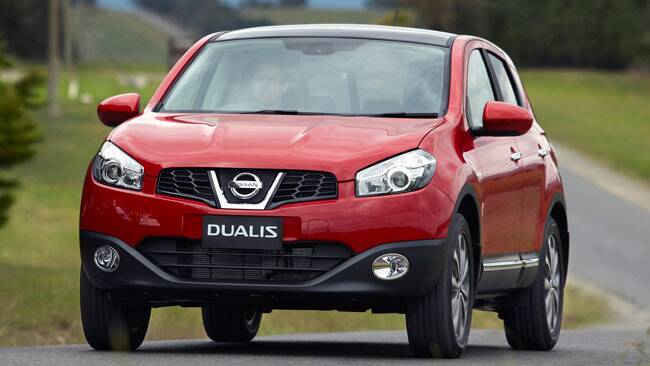 A smart family choice and practical, with a Dualis+ for people who need more cabin space. Not as trendy as some, but solid, sensible and a nice ride.

Subaru XV
Price: from $28,490
Output: 2-litre four, 110kW/196Nm; 6-spd manual, CVT auto, front-wheel drive
Thirst: 7.3L/100km
Subaru XV
A good looker with an impressive badge, but getting well up in price. Hurt worst by a tiny boot and a fiddly CVT auto that dulls the performance Time has left the ASX well behind, despite chunky looks that appeal to some and an available diesel engine. It's just too rough and ready, especially as a city runabout.

Lowest price, based on 101 car listings in the last 6 months

MG ZS Subaru Forester Toyota RAV4 Mazda CX-5
Disclaimer: The pricing information shown in the editorial content (Review Prices) is to be used as a guide only and is based on information provided to Carsguide Autotrader Media Solutions Pty Ltd (Carsguide) both by third party sources and the car manufacturer at the time of publication. The Review Prices were correct at the time of publication.  Carsguide does not warrant or represent that the information is accurate, reliable, complete, current or suitable for any particular purpose. You should not use or rely upon this information without conducting an independent assessment and valuation of the vehicle.