The launch of an all-new Mazda 2 in a few months makes this a good time to check out older models of this quality small car from Japan.

Introduced to Australia in December 2002 the Mazda2 DY Series was a replacement for the Mazda 121, the latter a car that chopped and changed in its shape over the years, but generally enjoyed sales success downunder.

Smoothness and comfort in the Mazda2 are as good as in many cars that are a full size up. Meaning it can be used as a family car if you are considering downsizing your transport and the kids are in their preteen years. The 2 is surprisingly spacious for a small car because its relatively tall body allows good headroom in all seats. Extra space is available in the back seat as it's adjustable fore-and-aft.  It makes sense to take the whole family along on your pre-purchase test drive.

Mazda2 joins the others in the Mazda range in having a well-deserved reputation, so it sits high on the tree of cars that make good sense secondhand. However, as it's generally used as a city car you have to be sure to get one that hasn't been thrashed around in the rush and bustle of constant traffic.

The June 2005 makeover of the Mazda2 saw the push on maximising safety. Dual airbags became standard on all models. Another four were fitted to the top model, the Genki, and are optional on the others in the range. It's worth checking for the fitment of the extra airbags as they were well-priced and are fitted to quite a few cars.

That second generation Mazda2, the DE Series, reached Australia in September 2007. Even more stylish than the first, it continued to do well in the sales race.

All Mazda2 models sold in Australia have a four-cylinder 1.5-litre engine. It performs reasonably well and is economical unless pushed too hard. The 2005 facelift saw changes to the engine to fatten out its torque curve, but it's still no powerhouse. Likewise the all-new 2007 range is aimed at the conservative driver, not the keen revhead.

A five-speed manual gearbox is standard in the Mazda2, with a four-speed automatic being optional. The auto does a reasonable job with an engine of this size but try it for yourself to see what you think as it can struggle at times with a load on board, particularly in hilly areas. The manual overrides in the automatic help you make the best of the limited performance.

Noise levels are usually low but the aforementioned rough roads can increase in-cabin sound quite noticeably at times, as can concrete surfaces on some motorways.

Steering in the little Mazda2 is quick and precise, however, some say they find it a little too sensitive. Try before you buy.

Road grip is high and the smallest Mazda feels stable and comfortable under normal conditions.

The underbonnet area is reasonably spacious and a good home handyperson can do routine servicing. We recommend leaving safety items to the professionals. Having a workshop manual on hand when you do your own work makes a lot of sense.

Insurance rates are generally towards the bottom end of the scale. There seems to be a bigger spread than normal between companies so it's worth shopping around for the best deal. Don't just look at the cost of the premiums, also ask about excesses and no-claims bonuses and make sure you're comparing apples with apples.

Look for signs of body damage or crash repairs. Viewing the car in good light you should be able to see if the paint doesn't match from panel to panel. Also be sure there's no paint overspray on windows, mirrors, badges and other unpainted areas.

Look carefully at the condition of the interior trim and the lining of the luggage area for tears or stains. Quality is generally good but rough treatment can wear it down quickly.

During your test drive feel for hesitation in the engine, particularly when it's asked to accelerate suddenly.

An engine that's rough at idle may have problems. Call in a professional if there's the slightest doubt.

Make sure the brakes pull the car up firmly in a straight line and that the ABS system, if fitted, comes in under high pedal pressures. The pulsing through the pedal under ABS should be strong and there should be no locking of any of the wheels.

Listen for rattles and squeaks inside the cabin. The latter aren't common so may indicate a harsh life on rough road surfaces. Either that or a car that has been pranged and not repaired correctly.

Don't let the distance travelled by a used car overly influence your buying decision. Cars with low kilometres may have done a lot of work in tight traffic, and with an engine that was seldom running at its full temperature. 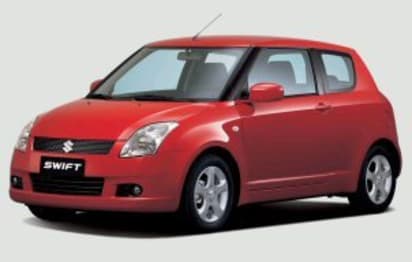 Suzuki Swift Toyota Yaris Mazda 3 Toyota Corolla
Disclaimer: The pricing information shown in the editorial content (Review Prices) is to be used as a guide only and is based on information provided to Carsguide Autotrader Media Solutions Pty Ltd (Carsguide) both by third party sources and the car manufacturer at the time of publication. The Review Prices were correct at the time of publication.  Carsguide does not warrant or represent that the information is accurate, reliable, complete, current or suitable for any particular purpose. You should not use or rely upon this information without conducting an independent assessment and valuation of the vehicle.