Fact: Children grow. Fiction: Parents can "make do'' with a small hatchback.

SUVs rule Australian roads for a good reason. Parents -- and singles needing space for leisure pursuits -- have picked up and run hard with prairie-size family-hauler wagons.

The SUV umbrella covers different types, from front-wheel drive to seven-seat all-wheel-drives, diesel engines to hybrids, built anywhere between Australia and Slovakia. Sizes range from the compact (3.7m) four-seater Suzuki Jimny to the seven-seater (5.1m) Audi Q7. Prices go from the Chery J11's $17,990 drive-away to the Audi Q7 6.0TDI at $257,200.

SUVs have a lot of metal and are in demand, so you'll find that new examples aren't cheap. A quality used model may be the best answer. The three models here are all-wheel drive automatics with seven seats. You will save some money by opting for five-seat versions but as buyer demand leans to seven-seat models this will, ultimately, buoy your resale value.

You probably don't need AWD, so look at the cheaper to run front or rear-drive versions. The Toyota has a higher mileage and is older. Toyota's reputation is based on reliability and, therefore, better resale.

The Hyundai is one of the better diesels for performance and economy. The Territory is good value and the Ghia example is the top-liner -- it's perhaps more suited to heavier loads. As always, these are examples of what's available and variations will occur. After this, we'll talk about how many children you want.

HOT TIPS
Diesels are our preference in big SUVs. If you don't go bush, don't worry about 4WD. Check that the third-row seats are in working order

Aussie designed and built wagon is a sensible -- and popular -- family wagon that'll pull a decent load while having space for the family. Even the third-row seats will accommodate two adults. Fuel consumption isn't up to most rivals but the Territory has comparatively cheaper service, repair and insurance costs. The Ghia has all the fruit -- leather, electronic stability control, six airbags, premium audio and DVD, rear camera and 18-inch alloys -- at a price that is about $20,000 less than new. 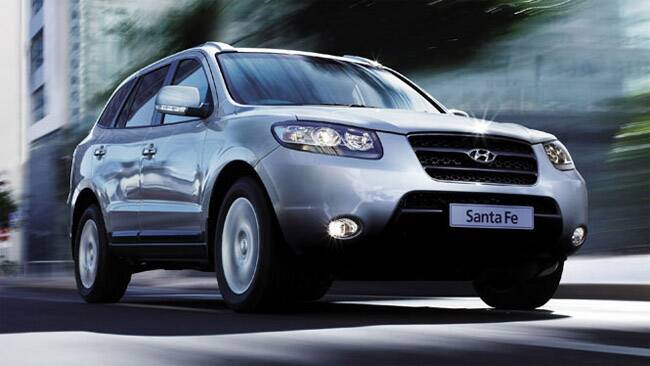 This is almost a new car though it precedes the latest Santa Fe. It's possible to get the new 2012 shape for roughly the same price but the equipment level may be compromised. This 2011 example appears to be barely used and has the lauded 2.2-litre turbo diesel engine that has plenty of urge yet miserly fuel consumption. It's also the top-line model Highlander that in addition to the seven seats -- also able to seat seven adults -- gets dual-zone climate control airconditioning, six airbags and stability control, Bluetooth with iPod connect, sunroof and leather upholstery. Silly name but the package works. Kluger's pricing may be more than some rivals but resale is generally higher, as is demand. The KX-S is the mid-spec model and gets a good blend of features including rear airconditioning, 19-inch alloys, reverse camera, leather upholstery and six airbags with electronic stability control. Klugers have a very versatile seat arrangement that includes a removable centre in the second-row seats for a six-occupant cabin that also gives a walk-through function. Fuel economy is average though performance is brisk.

Lowest price, based on 127 car listings in the last 6 months

Toyota Fortuner Mazda CX-9 Toyota RAV4 Toyota Land Cruiser Prado
Disclaimer: The pricing information shown in the editorial content (Review Prices) is to be used as a guide only and is based on information provided to Carsguide Autotrader Media Solutions Pty Ltd (Carsguide) both by third party sources and the car manufacturer at the time of publication. The Review Prices were correct at the time of publication.  Carsguide does not warrant or represent that the information is accurate, reliable, complete, current or suitable for any particular purpose. You should not use or rely upon this information without conducting an independent assessment and valuation of the vehicle.