EXPERT RATING
6
The SUV market was really beginning to swing by the time Honda launched its improved CR-V late in 2001. With sales surging and more and more people switching out of traditional sedans and station wagons, carmakers were racing to get in on the action. Honda having been there virtually from the beginning was enjoying
Graham Smith
Contributing Journalist
8 May 2018 • 10 min read
Current Offers Check Availability Get a Quote

The SUV market was really beginning to swing by the time Honda launched its improved CR-V late in 2001.

With sales surging and more and more people switching out of traditional sedans and station wagons, carmakers were racing to get in on the action.

Honda having been there virtually from the beginning was enjoying the benefits of being an early player. The CR-V was selling like gangbusters, but Honda had to be on its mettle to stay ahead of the game and keep its popular model at the head of the pack.

The new CR-V, released late in 2001, was an evolutionary model rather than an all-new one. It built on the success of the first CR-V by addressing the issues raised by owners.

There were new looks thanks to a redesigned nose with new headlights and grille, but the big news was the new 2.4-litre 'i-VTEC' engine.

There were new looks thanks to a redesigned nose with new headlights and grille.

The model range was similar to the previous model, being the base CR-V and the CR-V Sport, plus a number of limited edition special models that were released during the run of the model.

Both models had the new 2.4-litre four-cylinder engine, a choice of five-speed manual gearbox or automatic transmission, and on-demand all-wheel drive.

The model range was similar to the previous model, being the base CR-V and the CR-V Sport.

ABS became standard on the base CR-V in 2002, the same year cruise control was added to the CR-V Sport.

Those hoping for automatic climate control for the air conditioning, sat nav, a touch screen, parking sensors, a reversing camera or a park assist system would have been disappointed.

Predating Bluetooth there was no possibility of connecting an iPhone or Android device.

The rear-mounted spare tyre was a full-sized one, so there was no inconvenience from having a speed limited space-saver.

The CR-V's upright shape allowed for a high driving position that gave good visibility down the road and in all directions around the car.

It also produced a roomy cabin, with seats for five, and enough space to ensure a comfortable journey whether in the front or the back.

The CR-V's upright shape allowed for a high driving position that gave good visibility down the road and in all directions around the car.

There was also good luggage space, 948 litres with the rear seat in position, and there was the flexibility of a split-fold rear seat for even more capacity – 2038 litres – when needed.

Cupholders were provided and there were more options for storage spread around the cabin.

There was good luggage space, and there was the flexibility of a split-fold rear seat for even more capacity.

Lap sash seat belts facilitated the fitment of a car baby seat, but it was too early for ISOFIX mounts.

While the power and torque peaks increased, the i-VTEC system generated more performance across a broader range of engine speed. It was more drivable and boasted better mid-range performance.

Even with the extra zip it was no faster over the 0-100 km/h sprint, taking 10.4 seconds to complete the trip.

Honda recommended the use of 91-octane regular unleaded petrol.

The transmission options when the new model was launched consisted of a five-speed manual gearbox, or a four-speed automatic, but the latter was upgraded to a much more efficient five-speed in 2005.

It had the same on-demand all-wheel drive system, which limited its ability to handle the rough going off-road.

Most of the time it operated like a front-wheel drive car with all drive sent to the front wheels, until the system detected the front wheels were slipping, and it then redirected some of the drive to the rear wheels. As a result it was much more at home on slippery surfaces or in light off-road going.

The CR-V drives nicely with a smooth ride and competent handling and steering.

Its i-VTEC engine delivers good performance across the rev range, with good low-down torque for drivability, and top-end punch for performance when needed.

The CR-V drives nicely with a smooth ride and competent handling and steering.

Although it drives through all four wheels, its system is an on-demand all-wheel drive one rather than a regular four-wheel drive system seen on vehicles with a bush bias.

With its town-biased drive system, and relatively limited ground clearance, the CR-V will be found out if pushed down more challenging offroad tracks.

Safety features were limited by today's standards, but on par for the time.

There were airbags for those in the front seats; they also had seat belt pretensioners.

ABS braking was initially limited to the Sport, which also had EBD Electronic Brakeforce Distribution for even braking, until late in 2004 when the base model was upgraded with the same systems.

ANCAP rated it at four out of five stars when the CR-V was tested in 2001.

Owners generally praise the reliability of the 2001 CR-V; few report anything apart from having to replace the normal wear and tear items like brakes and tyres.

Some have reported experiencing a shudder from the driveline, it's usually from the rear diff and changing the oil often fixes it.

The i-VTEC engine is a gem with tight tolerances that demand regular servicing to keep it in tip-top shape.

The good news is that the engine has a cam timing chain, which doesn't require regular replacement, but there have been reports of the chain breaking when the tensioner fails.

The CR-V will be found out if pushed down more challenging offroad tracks.

Listen for any signs of a loose chain when assessing a car prior to purchase. If you're not sure have a mechanic check it for you.

Check for a service record to show that your intended purchase has been well maintained.

Look for signs of off-road use, particularly signs of it being used extensively. There are plenty that haven't left the black top, and they are the ones to go for.

The CR-V predates the introduction of capped price servicing, but the service costs are not excessive, and a competent mechanic can handle it.

This model is affected by the Takata airbag recall, so check with Honda to see if it has been reworked, or if not, when it will be done.

The warranty when new was for three years/100,000km, but that's long since expired.

MORE: If anything crops up, you'll probably find it on our Honda CR-V problems

Sally Evans: I've had my Sport for eight years and haven't had any problems with it. It performs well, is smooth to drive, and has plenty of legroom and a good boot.

Rob Lehman: I couldn't be any happier with this car. It's still going well, even after all these years, and I hope to keep it for a few years more.

Lucy Bedford: I bought this car because I wanted an economical family car, and it has been. It also has a good size boot, the cabin is well finished and comfortable, and I like the high driving position.

Greg Crawford: I had my 2005 CR-V from new and have done more than 200,000km in it with few problems worth reporting. The only issue was a shudder from the diff, but that went away when the oil was changed, and I do that regularly now.

Hyundai Santa Fe
Competent and great value-for-money, and there is a diesel option.

Ford Territory
Much maligned for its suspension troubles, the early Ford SUV is one to avoid. 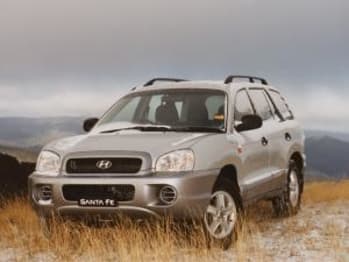 Toyota RAV4 Hyundai Tucson Mazda CX-5 Hyundai Santa Fe
Disclaimer: The pricing information shown in the editorial content (Review Prices) is to be used as a guide only and is based on information provided to Carsguide Autotrader Media Solutions Pty Ltd (Carsguide) both by third party sources and the car manufacturer at the time of publication. The Review Prices were correct at the time of publication.  Carsguide does not warrant or represent that the information is accurate, reliable, complete, current or suitable for any particular purpose. You should not use or rely upon this information without conducting an independent assessment and valuation of the vehicle.