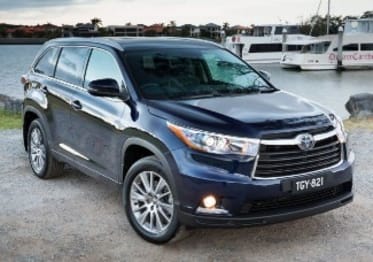 The 2015 Toyota Kluger range of configurations is currently priced from $19,990.

Carsguide Richard Blackburn had this to say at the time: It may be grandpa's axe but the Territory still feels the sharpest of this trio on the road. It makes you wonder what Ford could have done with it given the development budgets of its rivals. It's a better drive than both, has a lower starting price but has been left behind in some key areas, including safety and interior packaging.

The 2015 Toyota Kluger carries a braked towing capacity of up to 2000 Kg, but check to ensure this applies to the configuration you're considering.

The Toyota Kluger is also known as the Toyota Highlander in markets outside Australia.

See All Toyota Kluger 2015 for Sale
View cars for sale

The Toyota Kluger has maximum towing capacity of 2000kg. Some models also offer heavy-duty or towing option packs which can increase towing capacity, as well as options which can hamper towing capacity. Towing capacities can vary wildly on a large number of factors. These include engine, transmission, model, and options chosen. Always check with the manufacturer or in your vehicles handbook before attempting to tow anything.

Dimensions for the 2015 Toyota Kluger are dependent on which body type is chosen. The maximum width and height is 1925mm x 1730mm and can vary on the basis of model.

Check out real-world situations relating to the Toyota Kluger 2015 here, particularly what our experts have to say about them.

See All Toyota Kluger 2015 Q&As
Disclaimer: You acknowledge and agree that all answers are provided as a general guide only and should not be relied upon as bespoke advice. Carsguide is not liable for the accuracy of any information provided in the answers.

The best new cars coming to Australia in 2021

Toyota Kluger, Kia Sorento, Hyundai Santa Fe and Nissan Pathfinder: Why you should wait to buy your next large SUV