The Japanese and the Koreans hold sway in the small car segment, they have done for years, but there are now also a number of European brands, like Renault, fighting for a share of the highly competitive market.

Renault returned to the market in its own right in 2001, but prior to that it had a somewhat chequered history under the control of independent importers.

If you were to turn the clock back 30 years ago you’d find Renault was a well respected brand with a loyal following, but that was eroded through the ’80s and ’90s when it stuttered and stumbled along and lost the confidence of the market. Buyers could never be really sure their dealer would be there when they next took their car in for service.

With that background Renault had plenty of ground to make up when it stepped in and took over the distribution of the brand itself in 2001.

It hasn’t set the world on fire since it did take back control; instead it has gone along quietly without much fuss as it has worked to rebuild the brand in the eyes of the market.

The Clio was a small hatch that was given a tough task when Renault launched it against the heavyweights of the small car market in a category that was traditionally price driven.

To succeed Renault had to convince buyers that it was worth paying a little more for the features and refinement of a European brand.

The problem for Renault was that the mostly Japanese competition had lifted their game considerably and brands like Mazda and Honda were selling some pretty hot little cars.

But the Clio had plenty to offer anyone who cared to take a closer look. It was an attractive looking little car with a dash of French flair that made it stand out from the Japanese crowd; it was packed with plenty of features and was a fun little car to drive.

The company first hit the market in 2001 with a handful of hot 2.0-litre Clio Sport three-door models to help kick-start the brand with a sporting image.

They were followed a few months later by a facelifted model, and with that came the full range.

There were three and five-door hatches, with three levels of equipment, and a number of limited edition models that came with a few extra features.

Engine choices were 1.4, 1.6 and 2.0-litre, but the 1.4-litre was the only one available with an automatic transmission.

The engines were all double overhead camshaft units and willing little things if you were prepared to rev them.

The 1.4-litre auto Expression five-door hatch kicked off the range in style by winning the trophy for the best small car in the 2002 ‘Australia’s Best Cars’ award.

When stacked up against other small cars it was well equipped with standard features like air, adjustable steering wheel, power front windows, six-speaker sound system with cassette player, remote central locking and an engine immobiliser.

Step up to the five-door Privilege or three-door Dynamique and you got the 1.6-litre engine and a five-speed manual gearbox. You also got the extra comfort of climate control air, a trip computer, lumbar adjustment for the driver’s seat, and a CD player.

At the top of the range was the fun-filled Sport three-door hatch that boasted the 2.0-litre engine. Light and powerful the Sport delivered high performance with go-kart like handling and powerful braking power courtesy of its disc brakes on all four wheels.

The lesser models were more biased towards ride and quiet comfort, but still handled well if not quite as direct and precise as the Sport.

Being small there isn’t heaps of room inside the Clio. It was fine for those sitting in the front that enjoyed a comfortable time in supportive seats, but those in the rear found themselves a little cramped.

The Clio is mostly reliable without any major problems.

Those problems it does have tend to be fairly minor ones, like electrical faults, warning lights staying on, and sometimes difficult starting.

Other than those there can be the odd oil leak around the engine.

The engines have a cam timing belt that requires changing at 100,000 km and it’s important that it is changed. A breakage can lead to major internal damage to the engine that’s expensive to repair.

It’s also worth checking where you will get your Renault serviced as there aren’t as many dealers around as there are for other makes. The big cities are pretty well covered, but the country isn’t.

The Clio is pretty well equipped to handle a crash. All models had dual front airbags, along with the dynamic safety of ABS antiskid brakes and emergency brake assist.

Premium is the recommended fuel for all Clio models.

Tony Muir replaced his 2002 VW Polo, which he describes as a disaster, with a 2003 Renault Clio Expression Verve 1.4. He reckons the Clio was a great little car. The upsides, he says were the road holding and braking, which made him feel safe, the French style, the interior, firm supportive seats, and good-sized boot, and the fuel economy. The downsides were the noise through the gears, the sluggish acceleration, the lack of rear seat room and low roofline that cramped the rear seat passengers. Tony also had the expensive misfortune to break a timing belt at four years and six months when the car had done 67,000 km. It did considerable internal damage to the engine and he says owners should be aware of the potential consequences of not changing the belt. 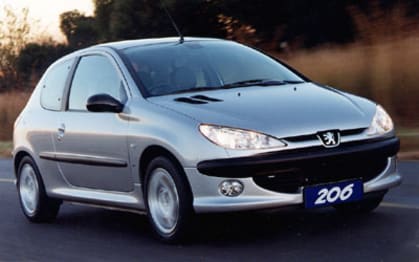 Renault Captur Fiat 500X Hyundai i30 Skoda Fabia
Disclaimer: The pricing information shown in the editorial content (Review Prices) is to be used as a guide only and is based on information provided to Carsguide Autotrader Media Solutions Pty Ltd (Carsguide) both by third party sources and the car manufacturer at the time of publication. The Review Prices were correct at the time of publication.  Carsguide does not warrant or represent that the information is accurate, reliable, complete, current or suitable for any particular purpose. You should not use or rely upon this information without conducting an independent assessment and valuation of the vehicle.