EXPERT RATING
7.5
Mitsubishi Lancer is a small to medium Japanese car designed and made to a high quality, making it one of the leaders in the reliability stakes.

Mitsubishi Lancer is a small to medium Japanese car designed and made to a high quality, making it one of the leaders in the reliability stakes. Aimed at the conservative buyer rather than the one looking for excitement Lancer is usually driven gently and maintained correctly. Which explains why it’s well-regarded on the used-car scene.

However, the Lancer MR coupe of 1997 to 2004 is a popular choice with sporting drivers due to its firmer suspension and sharper steering.

If you do want real excitement, the ultra-hot Lancer Ralliart and Lancer Evolution (Evo) models provide stunning performance, but cost big bucks. We won’t cover them in this used-car feature as they are from a totally different market segment.

Engines are all four-cylinder units and come with a big spread of capacities.

The Lancer grew larger with each new model and from October 2007 is comfortably into the medium segment so can be used as a family car if the kids aren’t yet into their hulking teenage years. Interior space is good in the front seats in all models. Rear seat headroom can be tight in the older hatches, but is generally fine in the sedans and wagons due to their extended rooflines.

Lancer comes in a big variety of body types:two-door coupes, three-door hatches, four-door sedans, five-door hatchbacks and five-door station wagons. Not all bodies were on offer at all times.

Three-door hatches prior to 1996 were called Lancers, but the name was changed to Mirage with the introduction of the new model of that year. Mirage shares most of its out-of-sight parts with Lancer, the name change simply being there to try and create a new market niche for the three-door. Imports of the Lancer-based Mirage ceased in 2004 although the name returned in 2013 but in an unrelated small hatch.

Ride comfort in the standard Lancers is generally good, though rough Australian backroads can sometimes thump them about. Engines are all four-cylinder units and come with a big spread of capacities ranging from 1.5, 1.8, 2.0 and finally 2.4 litres. The marketing strategy saw the largest engine at any one time being introduced in the upmarket models, then gradually making its way down the line.

The Lancer is relatively easy for the home mechanic to work on.

The 2.4-litre powerplant has plenty of torque, giving the car excellent performance and safe overtaking, yet it doesn’t use a lot more fuel than the other engines. Manual gearboxes are all five-speed units. Automatic transmissions on most older models were three-speed units until 1996, and had four-speeds from then.

The auto with the 2.4-litre remains a four-speeder, but tiptronic functions give it increased usefulness if the driver is keen on squeezing a little more out of the engine. Spare parts and repair prices are about average for this class and the Australian Mitsubishi dealer network is widespread and efficient.

The Lancer is relatively easy for the home mechanic to work on, with good underbonnet space and nothing particularly tricky in its layout. Insurance charges are about average for the class, though you will often be asked to pay considerably more for the hot turbocharged GSR.

Though Mitsubishi has pulled out of local manufacture the company continues to operate as a major player here, now exclusively with imported cars. Lancer is at the vanguard of the new Mitsubishi Australia.

If possible, start the engine when it is completely cold. It should fire up within a couple of seconds and idle smoothly and quietly straight away.

Carburettor engines, only fitted until 1996, won’t be quite as smooth when cold as fuel-injected ones, but if things seem too bad call in an expert for advice.

If the engine puffs oily smoke from the exhaust under hard acceleration it may be due for an overhaul.

Look for rips in the seats, excess wear in the carpets and for damage in the luggage area.

Rust is uncommon but look over the lower areas of the body and the bottom corners of the doors, tailgate or bootlid as applicable. Also check the surrounds of the front and rear windscreens.

Check for panel repairs by looking for ripples in the panels, paint that doesn’t match correctly from one panel to another, and tiny spots of paint on glass, badges, body trim and so on.

Do a complete check of all interior surfaces, in particular the tops of the dashboard and the rear parcel shelf. Look for rips in the seats, excess wear in the carpets and for damage in the luggage area.

A manual gearbox should be slick and easy to use.

Feel for an automatic transmission that is slow to engage gear or is inclined to change up and down unnecessarily. A manual gearbox should be slick and easy to use. If not there could be trouble - fast changes down through the gears will show the problem first.

Beware cars aimed at family cars but which fall into the hands of crazy teenagers who are just getting into their car-enthusiast years. 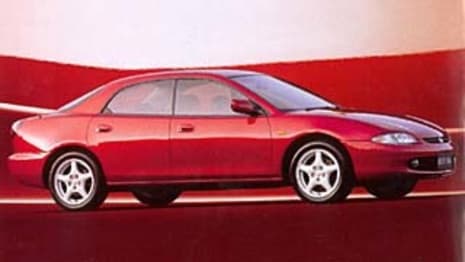