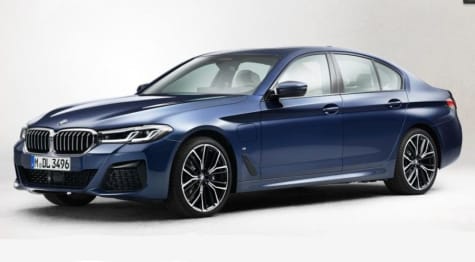 Carsguide Contributing journalist Peter Anderson had this to say at the time: The G30 5 Series is an excellent car and unless you're looking for the serious punch of the V8 M550i, or want to run with the cops in the diesel, the 530e is a great option. No slower than the 530i, well-equipped and that rarest of things, a truly elegant BMW. Nobody buys a BMW with an eye on the budget, so at this level, the $3000 gap is nothing to worry too much about. For EV-sceptics, the range anxious or just for someone who just can't take the full EV plunge now, a PHEV is a great bridge between the two worlds.

This is what Peter Anderson liked most about this particular version of the BMW 5 Series: Good to look at, Effective EV mode, Well equipped

The 2021 BMW 5 Series carries a braked towing capacity of up to 2000 Kg, but check to ensure this applies to the configuration you're considering.

BMW's big sedan was once a mainstay for the brand but is now relegated to a bit player in this SUV-mad market. Not wanting to let it fade...

BMW's big sedan was once a mainstay for the brand but is now relegated to a bit player in this SUV-mad market. Not...

Check out real-world situations relating to the BMW 5 Series here, particularly what our experts have to say about them.

See All BMW 5 Series Q&As
Disclaimer: You acknowledge and agree that all answers are provided as a general guide only and should not be relied upon as bespoke advice. Carsguide is not liable for the accuracy of any information provided in the answers.

In true BMW style, there are plenty of colours available and some of them are eye-wateringly expensive. The only freebie is Alpine White, a solid colour. For $2000 you can have Black Sapphire, Carbon Black, Bluestone, Phytonic Blue, Sophisto Grey and Bernina Grey Amber Effect.

Tanzanite Blue, Alvite Grey and Aventurine Red are $4500 while Brilliant White is $6500.

The standard interior is wrapped in leather and trimmed with wood that isn't horrible. Being a big sedan there is a ton of room and passengers will enjoy a quiet cabin.

Dimensions for the 2021 BMW 5 Series are dependent on which body type is chosen. The maximum width and height is 1868mm x 1498mm and can vary on the basis of model.

Wheel size for the 2021 BMW 5 Series will vary depending on model chosen, although keep in mind that many manufacturers offer alternate wheel sizes as options on many models.The wheel size available will alter the range of tyres available to be fitted.

The boot is smaller than the standard car's as there is a lithium-ion battery hidden underneath the now-sloping floor. With 410 litres, it's smaller than a 3 Series' but it doesn't look that small. There is also a spot for the charging cable and its bag behind the left wheel arch.

The BMW 5 Series has maximum towing capacity of 2000kg. Some models also offer heavy-duty or towing option packs which can increase towing capacity, as well as options which can hamper towing capacity. Towing capacities can vary wildly on a large number of factors. These include engine, transmission, model, and options chosen. Always check with the manufacturer or in your vehicles handbook before attempting to tow anything.

The BMW 5 Series has five seats and is exceptionally comfortable for four. The middle seat is fine for smaller folks on reasonable trips.

Forget Ford Falcon XR8 and Holden Commodore SS, here are the patrol cars you might not be aware the police are driving in 2021