There was a time when being a “bloody” Volvo driver was anything but cool, but the Swedish brand best known for its bland styling and boring safety message is enjoying a new image that pokes fun at its staid past. It all began with a new generation of models that were more pleasing to the eye. Gone were the boxy old shapes that resembled high rise dwellings on wheels, replaced by softer curves that better fitted modern times.

Volvos began to blend in instead of standing out for the wrong reasons. Traditional Volvo owners, who appreciated the engineering, build quality, and, yes, even the styling may not have been so enthusiastic about letting the past go, but the company had to attract new buyers and the new models were clearly aimed at doing that.

While Volvo claimed safety as its own realm in the 1970s when it relentlessly sold its safe and sound message, by the time the 1990s rolled around it had lost its gloss.

Safety was no longer the strong selling point it had been, and car buyers were shopping for excitement. In any case Volvo’s rivals were at least equal in safety terms so there was no real competitive advantage either.

By the time the new 40 series was launched in 1997 Volvo’s drab boxy shape wasn’t only dated, it so identified the Swedish cars that it was an impediment to sales. It was clearly time to move on.

The 40 series effectively replaced the oddly styled 440, which had died in sales terms. Unlike the 440 the new 40 series was pleasantly styled, much in line with contemporary styling trends, with clean lines and softer edges that were in stark contrast to previous models form Gothenburg.

The S40 and V40 were essentially the same, the S denoting the sedan model, the V standing for variant or wagon. The body differences were from the rear doors back, the front was the same.

Mechanically both models were the same. Initially there was just the one engine available, and that was a smooth 2.0-litre double overhead camshaft 16-valve all alloy four-cylinder unit which boasted 103 kW of peak power generated at 6100 revs and 183 Nm of torque which arrived at 4500 revs.

Not generally renowned as a performance car, the 40 series was something of a surprise packet if you were prepared to rev it hard and high to realise its performance potential.

The performance was boosted by the introduction of a 1.9-litre turbocharged engine a few months after the initial launch. With the turbo under the bonnet the T-4 40 series boasted 147 kW of peak power.

A five-speed manual gearbox was standard, or for an extra $2000 there was a four-speed auto available, and the drive was through the front wheels.

On the road the auto was smooth in its operation but tended to hunt between gears, and soaked up some of the four-cylinder’s power to dull the performance which was more evident with the manual ’box.

The ride was a little solid for what was a family sedan, but the handling was safe and secure, although it exhibited the usual front-wheel drive tendency to push wide at the front when pressed.

When you selected the T-4 you also got 16-inch alloy wheels, traction control, sports suspension and sports seats.

Generally the 40 series is living up to Volvo’s reputation for reliability, so look for a service record that can be verified. It should either be from a Volvo dealer or acknowledged service specialist.

Major services are due every 45,000 km and it’s important to replace the cam belt every 125,000 km. Failure to do so risks severe internal damage if the belt breaks.

The 40 series was packed with safety features that makes it a worthy buy on the used market.

Add to that front seat belt pretensioners, and built-in baby seats that match toddlers to the adult seat belts, and you have an impressive secondary safety package.

Joe Perillo has owned two V40s, the latest a 2.0T. He says the turbo provides more than adequate performance, the compact size is good for city driving, while open road driving is nicely European and very enjoyable. He sums up by saying the V40 is a lot of fun for such a practical car.

Glenys Allender is very satisfied with the 1997 Volvo S40 T4 she has owned for two years. On the positive side she says it has excellent fuel economy, smooth power, superb handling, powerful brakes, its good sized boot, and solid build quality. Negatives include the hard ride, faulty fuel gauge, and poor headlights. 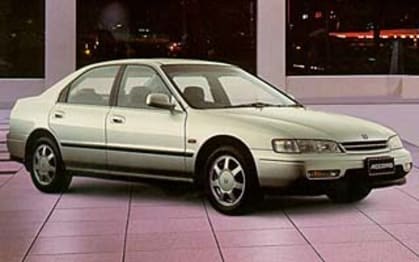 Volvo V60 Mercedes-Benz A-Class Ford Focus Volkswagen Golf
Disclaimer: The pricing information shown in the editorial content (Review Prices) is to be used as a guide only and is based on information provided to Carsguide Autotrader Media Solutions Pty Ltd (Carsguide) both by third party sources and the car manufacturer at the time of publication. The Review Prices were correct at the time of publication.  Carsguide does not warrant or represent that the information is accurate, reliable, complete, current or suitable for any particular purpose. You should not use or rely upon this information without conducting an independent assessment and valuation of the vehicle.