Ayrton Senna, with a Honda engine at his back, was blazing a trail around the world’s race tracks when Honda released its new fourth generation Accord in 1989 but it would be some time before the technology Senna was enjoying would filter through to the company’s regular production models.

Honda has had a long involvement in Formula One, dating back to the 1960s when they company even had its own race team and built its own cars just like Toyota is doing today.

There has always been a flow of technology from Honda’s motor sport to its road cars which have long had a reputation for being advanced, but it wouldn’t be until the early 1990s that the advances developed when the great Brazilian driver was at his peak were passed on to the average motorist.

The fourth generation Accord released in 1989 was a competent well built car, but it was just a step along the path to what the Accord has become today.

By the late 1980s the Accord had blossomed into a car much respected by the motoring press and public at large. It was a far cry from the humble beginnings back in the 1970s when Honda first sold the Accord here.

Back then, while they had a reputation for being of better quality than other Japanese cars, they were plagued with problems. While they were solid and reliable mechanically they suffered badly from rust and the bodywork was rather flimsy by comparison to other cars of the time.

That began to change through the 1980s when all carmakers had to face up to many challenges, from safety to the environment.

It was during that time that Honda really evolved into the aspirational brand it has become.

Overseas the new Accord was available in a number of versions, but here Honda chose to limit the choice to an EXi sedan and Aerodeck wagon, and an EXi sedan with four-wheel steering, which was a fad at the time.

The styling was greeted with a yawn by most people of the time. There was nothing that offended in the Accord’s soft, clean lines, but by most standards both the sedan and wagon were dull.

Although Honda had an engine with variable valve timing – one of the things Senna used to great effect in F1 – available in the Accord in other markets it chose not to release it here.

Instead our Accords had a 2.2-litre single overhead camshaft four cylinder engine boasting four valves per cylinder and fuel-injection. Peak power was put at 103 kW at 5200 revs and 192 Nm.

Buyers could choose between a five-speed manual gearbox or four-speed auto, while power steering and four-wheel disc brakes were standard.

Four-wheel steer was mostly an aid to parking, it was only active below 30 km/h.

Air-conditioning became standard in 1993 on both sedan and wagon, the latter also getting standard CD sound.

Honda specialist Adam Kovarik of In-N-Out Motors says while the Accord is a well built and reliable vehicle having it serviced according to Honda’s recommendations is crucial to longevity.

Before driving away in an Accord check for a verifiable service record that shows it has had regular oil changes. Kovarik says the oil should be changed every 20,000 km, it should have regular transmission services if it’s an auto, and the cam timing belt must be changed at the recommended intervals. That’s 80,000 km up to 1990, 100,000 km thereafter.

Leaving the cam belt risks severe internal damage to the engine if the belt breaks, the pistons will come into contact with the valves.

Kovarik also says it is crucial that Honda recommended oil be used in the auto transmission. Other oils can lead to swelling of seals, which can then result in hard shifting and slippage between shifts.

Listen for a ‘clicking’ noise that might indicate a worn CV joint when test driving. The noise is usually louder when turning.

The fourth generation predated the introduction of airbags in the Accord, so relies on its body structure and seat belts for crash protection.

Twenty-five-year-old Glenn Hadgkiss has owned his 1991 Exi for two years, having bought it with 87,000 km on the odometer. He rates the performance and handling as nothing special, and the interior cramped for four adults. To improve the handling he has fitted lowered springs and 16-inch alloys, and he’s fitted a larger exhaust from the converter back. His only problems have been with the speedo and distributor.

John Vanderwerf bought his 1991 Accord four-wheel steer in 1994 with over 100,000 km on the odometer. It has now done over 350,000 km and has proven to be quite reliable, needing a new brake master cylinder, radiator, and drive shaft boots. John says it is great to drive, with good road holding, comfort, and ease of parking, but parts can be expensive and the road noise is high.

Tony Brienl has done 140,000 km in the Accord he purchased in 1994. It has been serviced by a Honda dealer from new, and apart from routine replacement of tyres, battery, etc., the only work needed has been to replace an engine mount in 2001 and a CV-joint in 2004. The car has been a model of reliability, uses no oil, and he would recommend a second hand Accord of this vintage to anyone, provided there is documentary evidence of regular service.

• Service record a must

• Ensure timing belt has been changed as recommended

Now in the last days of its useful life, the fourth generation Accord would make a good choice for the novice driver who values reliability and low operating costs. 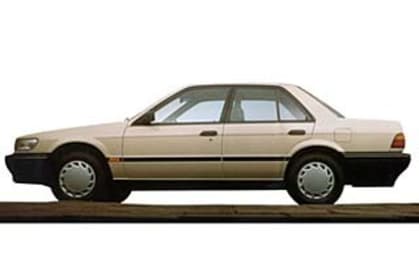 See 1989 Honda Accord pricing & specs >
Have you considered?
Check out more Sedans

Mercedes-Benz C-Class Mazda CX-5 Toyota RAV4 Genesis G70
Disclaimer: The pricing information shown in the editorial content (Review Prices) is to be used as a guide only and is based on information provided to Carsguide Autotrader Media Solutions Pty Ltd (Carsguide) both by third party sources and the car manufacturer at the time of publication. The Review Prices were correct at the time of publication.  Carsguide does not warrant or represent that the information is accurate, reliable, complete, current or suitable for any particular purpose. You should not use or rely upon this information without conducting an independent assessment and valuation of the vehicle.