The pick of the FPV litter can hold its own against some much more expensive opposition.
EXPERT RATING
6
Craig Duff
Herald Sun
10 Apr 2012 • 4 min read

Road runner would have been road kill if Wile E Coyote could have got his paws on Ford Performance Vehicles' supercharged V8.

The engine is known locally as Miami but is a modified version of the 5.0-litre Coyote powerplant fitted to Ford Mustangs in the US. At first glance the range-topping GT-E looks too tame - even with that deep honeycomb grille on the front bumper - to be a tyre-shredding pursuit vehicle.

That impression changes as soon you prod the right foot at a straight and unleash 335kW/570Nm. The only cars keeping up will be those with fairly exotic badges and prices north of $100,000. Not bad for a souped-up Falcon - and definitely capable of running-down the cartoon character.

The biggest problem with the $82,990 GT-E is it still feels like a $47,000 Falcon G6E. The FPV team fits this executive express with leather upholstery, reversing camera, wood veneer highlights and a decent sound system, but the plastic panels, buttons and dials can all be found in taxis around the country.

None of matters a damn when you're behind the wheel indulging in the sound and speed no Falcon can match. Budget-conscious buyers should look to the $76,940 F6E - it's the same car fitted with the 310kW/565Nm turbo six-cylinder engine. It is marginally slower off the line but the lighter engine helps the front wheels change direction faster in the turns.

Forced induction is the road all carmakers are following.  FPV has a foot in both camps with the supercharged V8 using mechanical power from the engine to compress air while the turbocharger on the F6E is driven off the exhaust gases.

A new eight-inch touchscreen has standard satnav with Suna real-time traffic updates and - bizarrely - a "green routing" mode that calculates the most economical path. Like FPV owners care - the fumes from the quad exhausts after a decent run would probably power a light car.

Yep, it's a Falcon, inside and out. That's not bad, given the The GT-E and F6E are the more restrained styling duo I the FPV stable and are the pick of the fleet for it. It's hard not to notice the six-piston Brembos lurking behind the 19-inch wheels but the rest of the body kit is - by muscle car standards - subdued. The leather seats look and feel good and the grip helps cover the fact the seat isn't bolstered enough to cope with the lateral forces this car can generate.

FPV has only improved on Ford's five-star work with the Falcon. The brakes are truly impressive despite a slightly wooden pedal feel and the car feels much more planted than a regular Falcon. The usual safety software comes in to play if things do get a bit sideways and there are six airbags if all else fails. 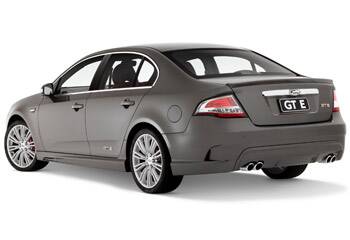 Forty years ago the only people who didn't want a performance Ford were those who barracked for Holden. Since then the Europeans have produces a succession of lighter, faster cars that use less fuel and home grown became hackneyed. The GT-E proves that doesn't have to be the case.

The Harrop-developed supercharger serves up a tidal wave of grunt so that in pure speed, it is not far off the likes of a Mercedes C63 AMG. And the FPV costs half as much. The weight over the front end means it is more at home in sweeping turns than hairpins and the suspension is a reasonable compromise between soaking up the bumps and keeping the car flat. Wider tyres would improve the grip but that's the only complaint.

The pick of the FPV litter can hold its own against some much more expensive opposition. Buying local puts a car with stunning performance and room for five in the garage. It's the best-of-both-worlds scenario for car enthusiasts who still have to lug friends or family around.

You could want for a little more ride comfort. You might find it just a bit much to live with. Then...

END_OF_DOCUMENT_TOKEN_TO_BE_REPLACED

For once, more power isn't part of the latest update to HSV 's range. The E3/WM3 models instead...