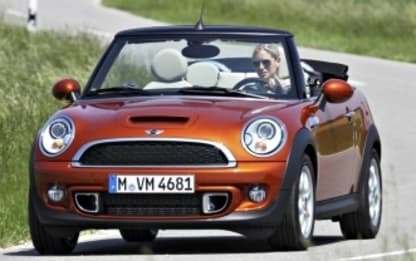 Carsguide Contributing journalist Peter Anderson had this to say at the time: To cut a long explanation short, get the manual if you're interested in having fun with this choice of car. I concluded that there can't be too many people who would get a kick out of the auto and the manual has confirmed that. The manual still doesn't come near to making any sense, but it makes significantly more sense than the auto. It's fun, has all the JCW bits (good and bad) and goes pretty quickly, thanks very much.

This is what Peter Anderson liked most about this particular version of the Mini Cabrio: Great engine, Manual gearbox makes all the difference, Chatty chassis

See All Mini Cabrio 2016 for Sale
View cars for sale

Dimensions for the 2016 Mini Cabrio are dependent on which body type is chosen. The maximum width and height is 1727mm x 1415mm and can vary on the basis of model.

Wheel size for the 2016 Mini Cabrio will vary depending on model chosen, although keep in mind that many manufacturers offer alternate wheel sizes as options on many models.The wheel size available will alter the range of tyres available to be fitted. Standard wheel sizes on the Mini Cabrio vary from 16x6.5 inches to 17x7 inches.