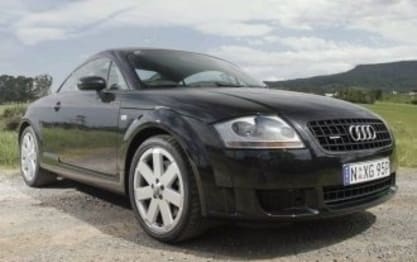 6 Jun 2017 by Ewan Kennedy
The Audi TT was launched to a startled world in 1998 with an ultra rounded shape based around its fascinating wheelarches. Read more
expertguide

7 Jul 2015 by Ewan Kennedy
The recent introduction of the third generation Audi TT coupe and the imminent arrival of the open-top roadster has created quite a stir of publicity about the seriously stylish sportscar. To the... Read more
expertguide

13 Dec 2012 by Ewan Kennedy
Introduced to Australia in May 1999 about a year after it first created a huge stir in Europe, the Audi TT was a hit from day one. Originally sold as a fixed-roof coupe, a TT roadster was added to... Read more
expertguide

18 Nov 2006 by Garth Montgomery
What is itThe dome shaped coupe was the uber trend setter when it first hit Australia in 1999 but has since seen formidable challenges from Mazda’s RX-8, Alfa Romeo’s Brera, BMW’s Z4 and more.Audi... Read more

RECALL: More than 10,000 Audi A3, A1 and TT cars have faulty dual-clutch automatic transmissions

New York stars the apple of our eyes

Audi TT has a new look

No car is perfect, so we've gathered everything relating to the Audi TT reliability here to help you decide if it's a smart buy.

RECALL: More than 10,000 Audi A3, A1 and TT cars have faulty dual-clutch automatic transmissions

How to remove an Audi TT radio?

When is the new Audi TT coming out?