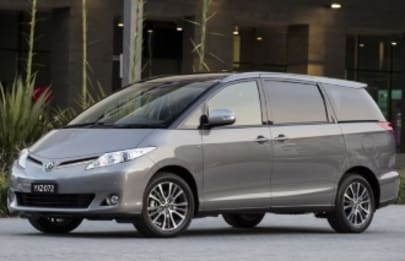 Carsguide Contributing journalist Peter Anderson had this to say at the time: Tarago is to the people mover what Hoover is to vacuums - everyone calls people movers Taragos. It drives well (enough), it's safe, contains plenty of people and stuff comfortably and, in Gai form, is quite good value when compared with its main competitor, the Kia Carnival. The Odyssey is quite a bit cheaper, but it is also noticeably smaller.

This is what Peter Anderson liked most about this particular version of the Toyota Tarago: Spaaaaaace., Packaging., Comfort.

The 2016 Toyota Tarago carries a braked towing capacity of up to 1600 Kg, but check to ensure this applies to the configuration you're considering.

See All Toyota Tarago 2016 for Sale
View cars for sale

Check out real-world situations relating to the Toyota Tarago 2016 here, particularly what our experts have to say about them.

See All Toyota Tarago 2016 Q&As
Disclaimer: You acknowledge and agree that all answers are provided as a general guide only and should not be relied upon as bespoke advice. Carsguide is not liable for the accuracy of any information provided in the answers.

Dimensions for the 2016 Toyota Tarago are dependent on which body type is chosen. The maximum width and height is 1800mm x 1810mm and can vary on the basis of model.

The Toyota Tarago had one busy interior. As these images show, there was a lot going on with its dashboard, with the sweeping instrument cluster not to everyone's tastes, while the lack of a centre console pushed the gear selector up into the centre stack, where a busy set of climate controls and a touchscreen multimedia system were surrounded by gloss-black trim. Leather could be had in certain variants.

The Toyota Tarago has maximum towing capacity of 1600kg. Some models also offer heavy-duty or towing option packs which can increase towing capacity, as well as options which can hamper towing capacity. Towing capacities can vary wildly on a large number of factors. These include engine, transmission, model, and options chosen. Always check with the manufacturer or in your vehicles handbook before attempting to tow anything.

Wheel size for the 2016 Toyota Tarago will vary depending on model chosen, although keep in mind that many manufacturers offer alternate wheel sizes as options on many models.The wheel size available will alter the range of tyres available to be fitted. Standard wheel sizes on the Toyota Tarago vary from 16x6.5 inches to 17x7 inches.