When Subaru launched the Brumby ute it was just another Japanese carmaker trying to build a following in Australia. With a range of small, mostly front-wheel drive cars, there was little to attract buyers away from more established brands like Nissan, Toyota and Mazda so Subaru struggled to survive. Until it made the bold decision to build all-wheel drive vehicles only.

Since making the decision to pump its drive through all four wheels Subaru has gone from strength to strength, with the Liberty, Impreza, Outback and Forester all doing great business.

While everyone knows about Subaru now there were some who were firmly of the belief that Subarus were something special long before they became trendy. That was particularly so of the all-wheel drive models the company spun off its bread-and-butter front-wheel drive cars.

The Brumby was just such a car, a small ute based on the sedan platform, with a remarkable ability to traverse rough terrain with its competent all-wheel drive system. Owners simply fell in love with them and many refused to part with them.

The Brumby arrived in Australia in 1978 and quickly established itself as a durable light workhorse, particularly in rural areas where farmers found its 400 kg payload useable, its car-like comfort welcome, and its ability to get over rough and slippery ground unbeatable.

Over time the diminutive ute proved itself to be virtually unbreakable. Many were driven and driven, and driven on even further as they refused to buckle under the pressure of a rough life on the land. Even when they’d become too rough for the road, some farmers simply deregistered them and kept driving them around the farm. They were about as reliable as a true-blue cattle dog.

Power was from a flat-four cylinder overhead valve engine of 1.8 litres capacity and fed by a single carburettor. Nothing fancy, but neither was its modest 61 kW of peak power, which was delivered at 5200 rpm.

Under normal highway use the Brumby’s power was delivered to the front wheels via a four-speed manual gearbox.

At 1620 kg it was a relative lightweight, which meant its performance was reasonable, although some owners who spent their time on the black top say they would have liked a little more torque than the 132 Nm it boasted.

But the Brumby wasn’t about performance; its appeal was its go-anywhere ability that rivalled that of many heavy duty dedicated four-wheel drives.

That ability came through its combination of light weight, increased ground clearance and on-demand four-wheel drive that could be engaged on the run by a lever on the transmission tunnel. Drive would then be sent to the rear wheels.

While its ability to get over rough ground was impressive, it was also what brought about the downfall of many Brumbys as drivers pushed them beyond their limits, believing them to be indestructible.

The thing that brought them to a halt was their relatively limited ground clearance. By normal standards they had generous ground clearance which allowed them to get over some pretty rough terrain, but overconfident owners who believed they could go anywhere a serious four-wheel drive could go did them some serious underbody damage when they pushed too far and got them hooked up on rocks and other immovable bits of landscape.

There was an update in 1984, which can be identified by a honeycomb grille and square headlamps.

A Sports model was released in 1986, and that came with twin halo moon roofs, square halogen headlamps, and park lamps in the bumper bar.

The Special followed in 1988 with a bull bar, radio cassette, tonneau cover and tow bar.

Today a Brumby makes a great, cheap car for a young driver, or someone with a bush block. It will carry a decent amount of sports or camping gear, or the odd bale of hay, and will get to those remote fishing or surfing spots, or the bottom paddock.

With the last Brumby sold in 1994 even the newest will have some pretty serious miles under its belt by now, so any car you might consider buying needs checking thoroughly.

As cars get on in age so their owners tend to neglect them. Try to establish a service record to assure yourself the seller has attempted to look after the car.

Properly serviced and driven within reasonable limits the Brumby is pretty much bulletproof; it’s when they’re neglected or beaten up that they develop problems.

Check the engine oil to make sure it’s been changed regularly. If it’s black and thick it hasn’t been changed in a while, so be suspicious. Listen for rattly engines, and have someone watch for smoke as you drive down the road.

It’s also worth checking the gearbox oil and diff oil, if you can, and look for water contamination through worn or damaged seals.

The Brumby’s perceived ability to do anything a big four-wheel drive can do led to many owners trying to make it do things that were beyond even its remarkable ability to beat around the bush. Check underneath for damage from rocks and stumps. Check also for damage to drive shaft boots and seals that might have been torn on rocks or downed trees an over-confident owner might have attempted to drive over.

Body rust is a problem, particularly if the Brumby has been left out in the weather and neglected. Any vehicle from coastal areas should be checked thoroughly for rust.

The bottom line if you want a Brumby is to take your time and look for that pristine car that hasn’t been beaten up. Do that and you’ll have a car that will be reliable for many years to come.

• rusty beaten up bodywork from years of hard work

• damaged underbody from beating around the bush 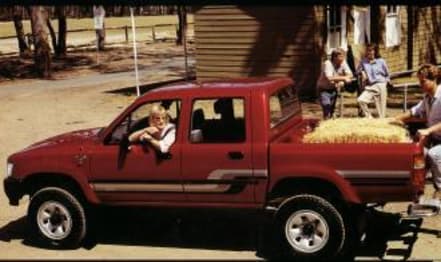