Here's our guide to the five biggest-selling people movers on the market (2010 year-to-date, VFACTS).

A new engine has given new life to Australia's biggest selling eight-seater. Families used to snap up the base Kia Carnival because it was the cheapest on the market but now the prices range over $50,000 for the Grand Carnival. Kia now says the bulk of sales (Carnival and Grand Carnival sales are counted together) are for these more expensive versions. That's a lot of money for a Kia but, complete with some quirky features, it does deliver on power thanks to the new 3.5-litre V6. It almost seems too much power when the car is light with only the driver on board.

Load it up though and there's plenty of room for passengers and luggage. We recently took the car to the NSW south coast for a weekend away this month and it was a comfortable highway cruiser with some bite around town with six people on board. However, there are some unusual features that take some getting used to. The controls to move the driver's seat are on the door. It took some time to find them but the more you got used to the car the more it actually became a handy location. It is particularly useful when you open the car after someone else has been driving and need to adjust the seat. It allows you to move the seat before getting in.

The footbrake is released by a separate lever near the steering wheel which also proved hard to locate. The big car also has a reversing camera. But not on a screen where just about every other car has it. Instead it was a tiny screen on the rear view mirror which prove d hard to see because of outside light on it and really too small a picture to be handy. There are plenty of cupholders and the retractable table between the two front seats is great for holding mobile phones and the like. The electric-opening back door is important for ease of access when loading and the second and third row seats cleverly fold down to improve access.

The biggest people mover here has been a surprising sales success in Australia. It's more like a van than a car in its looks, handling and raw feel. Yet Hyundai's competive pricing has lured buyers. The engine noise is loud inside. The interior is fairly bland and plastic but there are plenty of cupholders. Big is beautiful in this market though and there's copious space for passengers plus all their luggage. There are both petrol and diesel, but the automatic only petrol version is more popular, even though the diesel is more fuel-economic.

Toyota reliability teamed with price and a wide range has seen the Tarago as a favourite of large families, fleets, hotels and rental car companies for years. The V6 is a much better car than the four-cylinder but it costs more. The most expensive model costs more than $70,000. Apart from the extra power, which overcomes the sluggish feel of the four when it is loaded up, the side vision is better and there's more storage room inside.

Sex appeal has sold the Honda Odyssey for years. It is more car-like in its looks and feel than its competitors, it sits lower on the road and is good looking for this class of car. It has plenty of room inside and comes complete with plenty of cupholders and a handy retractable table between the front seats. The earlier models suffered from the lack of  a full lap and sash seatbelt in the centre of the second row but this is thankfully a thing of the past. It is not the most powerful car here and has less storage space in the back than many of the others but it rates strongly on looks.

Although it is one of the few peoplemovers offered with a diesel engine, buyers have preferred the mid-range petrol R/T model. The Journey has a few more tricks and features than some of its competitors and offers a beefier, more muscly styling. It is more of a cross between a 4WD and a people mover than its rivals. It has received a safety and features upgrade for 2010.

The next two best selling people movers in Australia at the moment are the smaller Toyota Avensis and Kia Rondo. They have less powerful engines than the top five and also have much less rear seat leg room and storage room in the back. While adults can happily sit in the rear row of the top five, it's really kids-only in these two. The Avensis, also is quite an old model, having been around since 2003.  However both rate well on price and suit smaller families looking for something more practical than a station wagon. 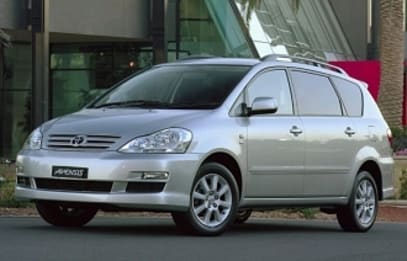 Lowest price, based on 24 car listings in the last 6 months

Kia Grand Carnival cars for sale
View cars for sale
Disclaimer: The pricing information shown in the editorial content (Review Prices) is to be used as a guide only and is based on information provided to Carsguide Autotrader Media Solutions Pty Ltd (Carsguide) both by third party sources and the car manufacturer at the time of publication. The Review Prices were correct at the time of publication.  Carsguide does not warrant or represent that the information is accurate, reliable, complete, current or suitable for any particular purpose. You should not use or rely upon this information without conducting an independent assessment and valuation of the vehicle.