Few cars polarise opinion like the Magna. It was Mitsubishi’s attempt to play the main game in the Australian market after making inroads with the smaller Sigma in the years after taking over Chrysler Australia. Major problems with the very first model unfortunately soured the name for many Australians, and have made it tough for Mitsubishi ever since.

At the time the Magna was launched the Australian market was going through a period of change. It was widely thought that Australian families would abandon the traditional large six-cylinder family car, of the type built by Ford and Holden, and move to slightly smaller cars with four-cylinder engines.

Mitsubishi anticipated this trend by upsizing its main model from the Sigma to the Magna, which would carry a family of five in comfort, with the economy of a four-cylinder engine.

It was a formula that worked quite well, the Magna was well received, at least until the auto trans trouble struck and gave buyers the jitters.

As history has shown the move away from the traditional large family cars wasn’t as strong as first thought, and the Magna has moved towards the Holden and Ford with a larger car and larger six-cylinder engines.

The Magna was greeted with great enthusiasm by the motoring press of the day who praised its roominess, smoothness, comfort and performance.

It came in family-sized sedan and practical wagon versions, with a choice of equipment levels from basic Executive to GLX, SE, Elante and Elite.

The styling was inoffensive, with solid lines that carved out a neat attractive profile in both sedan and wagon versions.

Power for the base models was a carburettor-fed 2.6-litre single overhead camshaft four-cylinder engine with a balance shaft for smoothness. It put out a reasonable 83 kW at 5200 revs, and 195 Nm, which was enough to make progress smooth and unfussed if not breathtaking.

There was also a fuel-injected version available which boasted 93 kW at 4800 revs and 205 Nm, along with much smoother drivability and fuel consumption.

A four-speed auto was the transmission of choice on the Executive, but there was also a five-speed manual available on other models. Drive went through the front wheels.

All models had power steering making life much less stressful, brakes were reassuring four wheel discs, suspension was conventional MacPherson Strut front which made ride and handling both comfortable and safe.

Inside there was cloth trim, carpet, and radio-cassette sound, with remote fuel and boot releases.

It has to be remembered that the TN is now fast approaching the end of its useful life on the road with many cars with odometer readings well into the 200,000 km range and beyond. With those mileages it’s normal that there will be increased breakdowns, with the likelihood they will occur more frequently in the future, so it’s important to approach a car as old as the TN with this in mind.

The TN is generally a solid, reliable old car that would suit young or first time drivers, but it’s worth looking for one with low mileage that has been well serviced. That might be difficult because owners are typically not willing to spend money on them when their value is so low. For that reason they are often serviced or repaired by small time mechanics who are able to work to a limited budget.

The Magna is perhaps best known for the problems with its automatic transmission that struck it down almost as soon as the TM, the TN’s predecessor, hit the road. It was a big blow to the reputation of the Magna that still lingers today, even though the problem was fixed fairly quickly.

The auto trans problem was still causing headaches when the TN was launched. The housing would be worn away and in need of replacement, an expensive exercise at the time. The cars on sale today are unlikely to suffer the problem, and if they do replacement transmissions are not the same expensive items they were.

The engine is generally reliable, but can suffer cracking of the block between the welch plugs. The head gaskets can leak, the timing chain can rattle, and if smoke can be seen trailing from the exhaust pipe, particularly on starting, the valve stem seals are probably shot.

Mechanics experienced with the TN advise against buying a carburettor-fed engine, and strongly recommend the fuel-injection engine for its smoothness and reliability.

Early Magnas can also suffer from electrical gremlins, often caused when wires break as the engine rocks back and forth under acceleration and braking.

Rust is always a problem with old cars, and the TN is no exception. Look carefully at the bottoms of the doors where rust can often be found. Check for windscreen leaks that point to rust around the windscreen.

Sue Lobban bought her 1988 TN Magna Executive wagon 12 years ago with 60,000 km on the odo. It has no done 171,000 km and she’s wondering if she should update to a newer model or stick with what she regards as a comfortable, quiet, faithful old steed. Although she loves the Magna, and it is in quite good condition with a tidy interior, good paint, and no visible rust, she has in the past had rust repaired in the front doors, the windscreen leaks suggesting there’s rust there, the drive shafts have been replaced, same with the engine mounts and a noisy timing chain, the engine has had new rings and is now smoking on starting.

Tony Pinkpank’s TN Magna GXL wagon has done well over 250,000 km. He says it’s very comfortable and reliable, but has had to replace the gearbox, which was noisy and leaking oil, and the valve stem seals.

Nathan Dean’s 1988 TN Magna Elite sedan has racked up 307,000 km on its original engine and transmission, and he says there are no signs it will give up soon. Apart from maintenance items, nothing has gone wrong with the car, which he says runs like a gem, and still consistently knocking up 20,000 km per year.

Andrew Curtis’s 1989 TN Magna manual has now done 310,000 very reliable kilometres. Apart from replacing an electronic sensor in the distributor, he has had to have the head shaved and a new head gasket fitted as the head warped at about 200,000 km. Rust is starting in the bottom of the doors.

Byron Waring owned a 1988 TN Magna GLX manual from 1994 to 1998 before selling it with 220,000 km on the odometer. He says it was smooth, quiet and responsive to drive and gave little trouble. Magnas can suffer cooling system problems, but they are usually caused by poor maintenance such as failing to change the fan belt regularly to prevent breakage, which can lead to overheating and damage to the head, and using water instead of coolant when topping up the radiator.

Peter Lausch sold his a 1988 TN Magna Elite wagon in 2003 after owning it for more than three years, and says it was nothing but trouble. He had to replace the cylinder head and welch plugs, the auto transmission, and three alternators, and gave up on the car when the head leaked for the second time.

• rust in doors and roof

• smooth EFI engine a must

• cheap transport for young drivers on a tight budget

Solid reliable and conformable first car for the beginner driver if it’s been well maintained by a caring owner. 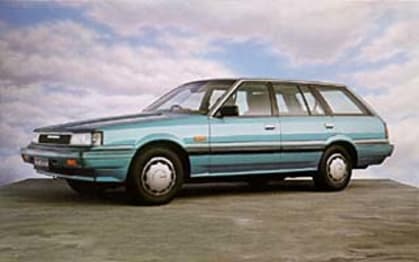