EXPERT RATING
3
The first Camry to be sold here was a family-sized hatch that pointed to the future of the Japanese brand in Australia.
Graham Smith
Contributing Journalist
CarsGuide
24 Jul 2017 • 7 min read
Book A Test Drive Locate A Dealer Current Offers

The first Camry to be sold here was a family-sized hatch that pointed to the future of the Japanese brand in Australia.

To the surprise of many it was bigger than expected, performed better and had the looks of a European car.

Before local production began in 1987 (with the introduction of the next model the Camry) it was imported from Japan.

While it was compared to other mid-sized models, like the Ford Telstar, Toyota was really eyeing off Commodore and Falcon buyers, hoping to tempt them to switch to its mid-sized newcomer.

It was only marginally narrower than the Commodore, and just a little shorter, and with its use of front-wheel drive the Camry had a remarkably roomy cabin that was almost as big as the Holden’s.

There wasn’t a range of models as such when the SV11 Camry was introduced; there was just one model, the front-wheel drive GLi hatch.

It had a 2.0-litre four-cylinder engine and the choice of a five-speed manual gearbox or a four-speed automatic transmission.

The SV11 Camry was released long before the advent of today’s convenience features like Bluetooth, so you can’t sync your iPhone or Android device, there was no touch screen, and sat nav was way off in the future.

Without modern features like a reversing camera, parking sensors, or park assist, parking was a touch-and-feel deal.

Despite its size, the Camry’s cabin was relatively roomy and compared well to bigger cars like the Commodore.

With seats for five, the Camry could accommodate two in the front and three in the rear, although three adults would have found the rear a bit of a squeeze.

The seats were generous, with comfortable padded buckets in the front; the rear seats were also very comfortable and unusually for the time had individual headrests.

Using front-wheel drive was a packaging masterstroke on Toyota’s part, it eliminated the need for a transmission tunnel and tailshaft like those on a rear-wheel drive (RWD) car and meant the floor could be flat.

As a result those in the front seats had generous legroom as well as decent head and elbowroom.

Rear seat passengers also benefitted from the lack of a tailshaft that ate into their space in the RWD car.

Generous use of glass helped to make the cabin feel airy as well.

The hatchback body style was also practical; the folding rear seat gave wagon-like space and versatility, and with the fuel tank under the rear seat the boot was quite large.

There were no cupholders for your drinks; cabin storage was limited to glove boxes in the dash.

The engine was a 2.0-litre fuel-injected single overhead cam unit putting out 77kW (103 horsepower) of power and 162Nm of torque at its respective performance peaks.

Designed to run on leaded petrol before the introduction of unleaded fuel in 1986, the Camry’s four-cylinder engine delivered surprisingly spirited performance that drew favourable comparisons with rival six-cylinder models from Holden and Ford.

The switch to unleaded fuel in 1986 saw a slight dip in the engine’s output when power dropped to 75 kW.

Running a pre-1986 leaded fuel model on unleaded petrol now requires the use of a lead additive, which most owners would find inconvenient and it adds to the running costs.

No problem with post-1986 cars, which are designed to run on 91-octane regular unleaded petrol.

Buyers had the choice of a manual gearbox or an automatic transmission. The manual was a five-speed with overdrive on fourth and fifth gears; the automatic was a four-speed with a lock-up convertor that came into play in top gear.

The Camry’s 2.0-litre engine was developed to produce its torque at quite low revs, which meant it was quite nippy off the mark.

With electronic fuel injection the engine started instantly when cold, ran smoothly right through the rev range without any of the driveability issues that made driving some of its carburettor-equipped rivals unpleasant.

A willing performer, it easily out-ran four-cylinder rivals like the Ford Telstar and Mazda 626, and was favourably compared to the six-cylinder Commodore and Falcon.

While the Camry could in no way be described as sporty it handled well with a slight bias towards the safety of understeer, that became more pronounced if the car was pushed.

The ride was comfortable without being plush, it was well damped, and the occupants were well isolated from bumps and potholes.

Safety features were limited to the basic structure of the car, lap sash seat belts and a collapsible steering column.

There were no airbags, the brakes weren’t ABS, and things like traction control and electronic stability control weren’t even imaginable.

Check seat belts for wear, and consider replacing them, even if they don’t appear to be worn.

Used Car Safety Ratings published by the Department of Infrastructure in 2008 rated the Camry as “average” for occupant protection in a crash.

There are no ISOFIX child seat anchorages (they weren’t introduced until 2014), so you'll need to use the belts to install a baby car seat.

If safety is important to you this is not a car to buy.

The SV11 Camry is now at least 30 years old, it’s so old it would qualify for historic registration in some states, although few might consider it a classic.

At such an age it is a risky used car proposition.

Although they were once renowned for their reliability, normal wear and tear over a long period and many hundreds of thousands of kilometres have almost certainly taken a heavy toll.

Expect the engine to have lost its zip, and use oil, look for smoke from the tailpipe, and check for oil leaks.

Dip the oil and check for sludge, sludge is an engine killer and its presence in the oil says the car has been neglected.

The manual gearbox should change gears smoothly without baulking, if it does the clutch could be worn out.

An automatic transmission should engage gears smoothly, shift without hesitating or slipping, and shouldn’t be noisy.

Suspension and steering wear is likely with joints and bushes worn, and shock absorbers may have lost their damping effect.

Do not buy one without a current roadworthy check, doing so is asking for trouble.

If in doubt about the condition of a car have it checked by a mechanic.

Also check for a service record, hopefully one that shows regular maintenance over the life of the car.

A car that has been driven for 30 years or more could be expected to have done 400,000-plus kilometres, so be wary of any car that is showing relatively low kilometres.

Capped price servicing was years away from being introduced when the SV11 Camry hit the road, but service costs are affordable.

MORE: If anything crops up, you’ll probably find it on our Toyota Camry problems page.

A risky buy, unless you find one of tip-top shape with relatively low kays. 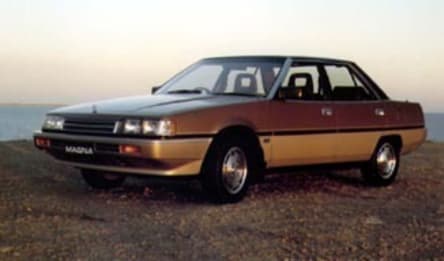