A lot of people have been waiting for the Pulsar to return and it's a solid contender.
Paul Gover
CarsGuide
30 Aug 2013 • 5 min read
Book A Test Drive Locate A Dealer Download A Brochure

Small-car buyers have plenty of reasons to welcome the Nissan Pulsar back to their shopping lists. Around 18,990 of them, by our count.

That's the driveaway price for the Pulsar sedan and hatch until the end of this month, and it's unlikely to go much higher in 2013 as boatloads of the born-again Japanese small car continue to dock in Australia. Nissan has set a year-end target for deliveries of its born-again baby and is now landing the cars needed to hit the bullseye, with big incentives on several fronts to ensure it happens.

The current deal includes on-road costs and a $1000 bonus, labelled as the 'Switch' incentive, but if you drill a little deeper you discover the reality of Nissan's pricing push. It effectively means the Pulsar - if you allow $2000 for on-roads and then add the extra $1000 - is a $15,990 car in Australia at the moment. And that's unbeatable buying.

The Pulsar is not the best car in the class, and we think it's a bit dowdy in some areas, but it does the job and a lot of people are coming back to the badge after the unfortunate experience - for Nissan and its customers - with the underdone Tiida. What the Pulsar really means is that any brand with a small car to shift needs to be setting the bar low enough to compete with the new Nissan, both sedan and hatch.

We've seen it many times in recent years, back from the 1990s when Hyundai was the first to go big on driveaway pricing with its Excel tiddler and other rushed to join the feeding frenzy. It's been the same more recently with five-year warranties and capped-price servicing, which are both intended to give customers a benefit that doesn't affect the car's resale value while also giving them certainty on their purchase.

Not long ago, baby cars like the Hyundai i20 were pegged at $15,000 and $19,990 became the default setting for small cars. Toyota admitted as much last year when it landed its all-new Corolla and priced it just below the psychological barrier at $20,000.

But the Nissan push has driven down the transaction prices - the level at which cars are really sold, not advertised and definitely not the Recommended Retail Price - considerably below the $19,900 level before on-roads or the near-essential automatic gearbox that drives the deal closer to $25,000.

If you scan the advertising over the past month it's easy to find driveaway rivals at $18,990, including the Ford Focus, with most small cars now pitched with an on-road price at $19,990. We've compiled our list of contenders using the RRP because there is always going to be some sort of sales incentive, so keep a sharp lookout and watch for the day when your first choice goes on sale.

Best of all for buyers, the price genie is now out of the bottle and - as Nissan continues to push the Pulsar - there will be deals through to the end of 2013 and probably well into next year. And beyond. Price: from $20,990
Output: 1.8-litre petrol four, 110kW/178Nm; 6-spd manual and auto, front-wheel drive
Thirst: 6.5L/100km
As good as the Toyota Corolla for comfort and class, but better as a value deal and definitely the one to benchmark in this class. The former Carsguide COTY winner has always been good buying, too. Price: from $20,290
Output: 1.6-litre four, 92kW/159Nm; 5-spd manual/6-spd auto, front-wheel drive
Thirst: 6.2L/100km
The best driving car in the class thanks to a tight chassis, although the 1.6-litre base engine is nothing special and nowhere near the fun factor providing by the turbo in the 2-litre ST. A sensible choice, although the dashboard is a confusing miss-match of switches. 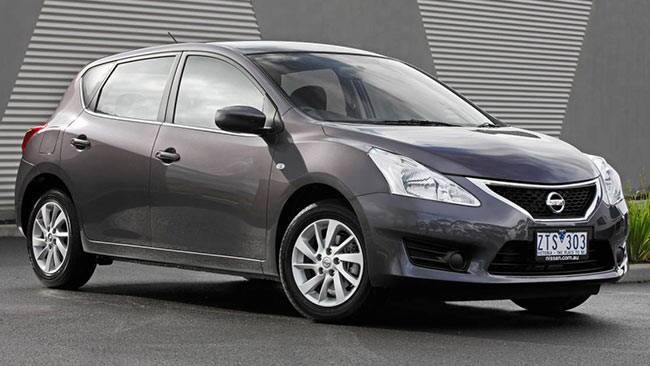 Price: from $24,990
Output: 1.8-litre four, 96kW/174Nm; 6-spd manual, CVT auto, front-wheel drive
Thirst: 6.7L/100km
A lot of people have been waiting for the Pulsar to return and it's a solid contender, not an outright leader. Quiet and comfy, for sure, but not as good as some of its rivals. But Nissan has big ambitions for the Pulsar and it's the leader on dollar deals.

There was a time, for a very long time, when a Toyota Corolla was the automatic choice for anyone looking to buy their first car. That drove up secondhand prices and helped provide plenty of willing buyers who graduated to a Corolla for their first new car. But not now.

The first Japanese baby car to really hit the sweet spot in Australia has been overtaken by compact contenders from South Korea and the Hyundai i30 is the current Carsguide choice for savvy secondhand shopping. A Corolla might look good, and plenty of people still recommend them, but their prices are artificially inflated by their history in Australia.

The i30 matches the Corolla in most areas including comfort and economy, and is bulletproof reliable. But it's smarter buying and you can get an equivalent car, or something newer or with fewer kilometres, than you would spend on an equivalent Corolla. What makes the i30 more enticing is the five-year warranty, which means buying near-new at around $15,000 can provide a car that still has the remainder of the manufacturer's cover.

If you're spending more, or intent on a diesel engine for long-distance driving, the i30 ticks that box. And there is also an i30 wagon, in a class where SUVs have virtually exterminated the once-popular baby station wagon.

Lowest price, based on 271 car listings in the last 6 months