EXPERT RATING
7
Utes have always been popular with Aussies, but never more so than in recent years when there has been more to choose from than ever before. The humble ute is no longer a mere work wagon; it is now called upon to perform all sorts of duties, from traditional worker, to cool sportster, weekend escaper and family hack.

Utes have always been popular with Aussies, but never more so than in recent years when there has been more to choose from than ever before.

The humble ute is no longer a mere work wagon; it is now called upon to perform all sorts of duties, from traditional worker, to cool sportster, weekend escaper and family hack.

They were once the realm of the traditional local car makers, Holden and Ford, who between them claimed the market. Now the market is dominated by Asian brands, in particular the Toyota HiLux.

Released in 2011 the PX Ranger is Ford's entry into this new ute market and like all new generation utes it comes in a wide range of models to suit most needs.

You could have almost any style you wanted including single, dual and super-cab bodies, cab-chassis or ute, 4x2, high riding 4x2, 4x4, petrol or diesel. There was also a choice of models from basic entry-level to the XLT with every feature you could wish for.

Unlike yesterday's utes, today's utes also deliver on the safety front. Most of the Ranger models get a five-star tick from ANCAP, it's only the lower level variants without curtain airbags that are hit with a four-star slap.

At the top of the tree the five-cylinder diesel delivers plenty of low-down grunt for comfortable cruising or hauling a hefty load.

On the road they exhibited decent drivability, the handling was safe and secure, the braking powerful.

Tucked away inside you rode in quiet comfort with every feature you could want. Indeed today's utes are all things to all owners.

Everyone agrees, the Ranger looks great, is comfortable and is a great towing vehicle.

Most owners say they are happy with their choice of ute, and few report any problems, but there are a couple of issues that keep cropping up.

One is the turbo. A number of owners have had turbos melt down, and the more experienced say the key is to let them idle to bring them the turbo temperature down before switching the engine off. Another thing they recommend is to use a good quality engine oil to keep the turbo bearing well lubed.

There are also reports of major engine issues after an oil change. It is claimed that the oil pump won't prime if the oil dump is longer than around 10 minutes, and if the pump won't prime it won't deliver oil to the engine and that means serious trouble. Some mechanics are aware of the issue, so talk to the guy doing your service and make sure he doesn't take a cuppa-break while the oil drains out of the engine.

Take a look at the lower radiator hose on your car and if it is close to rubbing on the engine, or has scuff marks that suggest it is rubbing on the engine, get a zip-tie to hold it away from the engine. Letting it rub through could lead to water leaks and a serious meltdown. There is a new hose available to avoid this issue, so talk to your dealer at the next service and get your car updated.

Anyone buying a used Ranger should be aware that it has a dual-mass flywheel and is affected by rapid clutch wear. A pulsation through the clutch pedal on manuals is a sign that all is not well in the clutch department. Replacing the clutch is not a cheap exercise.

If you are planning to operate the Ranger at or near its weight carrying capacity check it out with a suspension expert before doing so.

Check your chosen car for a creditable service record, and carefully go over it in search of evidence of off-road use. The Ranger is quite a capable off-roader, so anticipate that many will have been used off the black top. If you believe the car you're keen on had been off-road walk away. 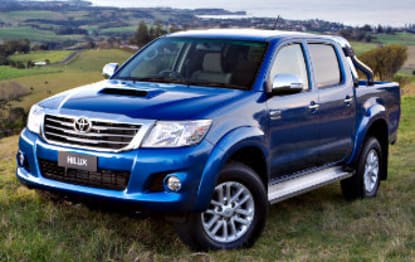 Lowest price, based on 151 car listings in the last 6 months

Toyota HiLux Isuzu D-Max Mazda BT-50 Mitsubishi Triton
Disclaimer: The pricing information shown in the editorial content (Review Prices) is to be used as a guide only and is based on information provided to Carsguide Autotrader Media Solutions Pty Ltd (Carsguide) both by third party sources and the car manufacturer at the time of publication. The Review Prices were correct at the time of publication.  Carsguide does not warrant or represent that the information is accurate, reliable, complete, current or suitable for any particular purpose. You should not use or rely upon this information without conducting an independent assessment and valuation of the vehicle.