EXPERT RATING
7
You can save a motza on a late-model used car, because the first owner has already taken the biggest hit... usually 30-50 percent, in depreciation. Ideally, you want to be the second owner, and hang on to the car for a few years, to maximise the value you get from your motoring dollar. We've picked our top five used
Bill McKinnon
CarsGuide
22 Sep 2016 • 8 min read
Learn More Build & Price Locate A Dealer

You can save a motza on a late-model used car, because the first owner has already taken the biggest hit... usually 30-50 percent, in depreciation. Ideally, you want to be the second owner, and hang on to the car for a few years, to maximise the value you get from your motoring dollar.

You won’t find any Euros on our list. The VW Golf, Peugeot 307 and Holden Astra are sweet to drive, but they can also fall to bits. They’re hideously expensive to fix and to service. Trust us. There is no such thing as a cheap, reliable, European used car.

A well-maintained 2007-2008 Corolla Ascent or Conquest is used car gold, because chances are it will still drive like new and you’ll enjoy many years of trouble-free ownership. The 1.8-litre engine, still used in the 2012 model, is frugal, uses regular unleaded and performance, with the six-speed manual or four speed auto, is reasonable.

It’s very easy to drive and park, with great vision, light, precise controls, comfortable seats and a durable, high quality interior. There’s enough back seat space to accommodate a couple of teenage kids; the sedan also has a huge boot. This Corolla also scored five ANCAP stars when fitted with seven airbags; there’s no traction or stability control on 2007-2008 models, though.

Impreza sedan is a more practical, spacious kid carrier than the hatch; both were the safest small cars available in 2007-2008, with five star ANCAP scores. If Subarus are scheduled by the book, they’re reliable; if not, they can be temperamental. The engine will probably use a bit of oil. This doesn’t necessarily indicate a problem; Subaru says check it monthly, or every 500 kilometres.

Among many good things going for the i30 is the fact that if you pick up a 2008-2009 model you’ll still have at least 12 months coverage on the car’s standard five years/unlimited kilometres factory warranty. Chances are you won’t need it, because the i30 is bulletproof, and cheap to run. Pick of the range for economy and performance is the i30 1.6-litre turbodiesel, Carsguide’s 2007 Car of the Year. The 2.0-litre petrol is a strong, reliable engine too.

Hyundai was the first maker to offer full iPod connectivity as standard in an affordable car with the i30. The hatch was joined in 2009 by the CW wagon, which has a family-sized boot. Go for base SX spec with the optional six airbags/stability control safety pack, giving it a four star ANCAP rating.

HYUNADAI I30 - see other Hyundai i30 verdicts

Blue-chip Japanese engineering doesn’t get any better than the Mazda3. It’s also the pick of this contest as a drive. You’re looking at a 2008 Neo Sport hatch or sedan, which should have the optional safety pack fitted. This includes six airbags and stability control. The 2008 model is a four star ANCAP scorer.

The 2.0-litre four is strong, responsive and runs on regular unleaded. Handling is agile and secure and on the road the car feels solid and polished. The stylish, durable interior has ample space for four, complemented by useful boot volume. The standard equipment list is stingy in Neo Sport spec; if you’re lucky, you may find a Maxx Sport, with cruise, 16-inch alloys and classier trim.

The Lancer was (and still is) heavily discounted when new, so you can pick up a late-model used one on the cheap: a 2009 or maybe even 2010 ES sedan or hatch (Sportback in Mitsubishi-speak). There’s nothing wrong with the big, basic Lancer except that it’s so stupendously boring. Still, in the car business, boring usually means reliable, durable and grief free, which the Lancer certainly is.

The 2.0-litre petrol engine has plenty of power and goes well on regular unleaded; you can have it with a smooth, efficient CVT transmission, which works beautifully around town. Stability control is standard; seven airbags were optional on 2009 ES and standard on the 2010 model. You’ll also have plenty of coverage left on the five years/130,000 kilometres warranty. The 2008-2009 Focus was engineered in Europe; ours were imported from South Africa, so quality and reliability aren’t as bankable as Japanese and Korean rivals, but a well looked after Focus is worth considering because late model ones are cheap.

Shop around and you may find a 2010 2.0-litre petrol LX sedan or hatch, with very low kilometres and a year or so left on the three years/100,000 kilometres factory warranty. 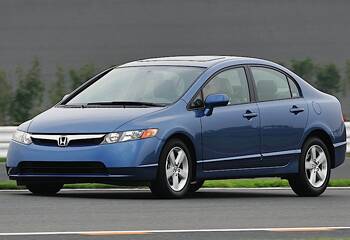 The Civic is big sedan, with the most sophisticated, fuel efficient small car drivetrain around in 2008, plus impeccable Honda quality, luxurious comfort and a smooth ride. So why isn’t it in the A team? No stability control or curtain airbags were available on the base VTi model, a bizarre omission only rectified in 2010. Like the i30 (which has the same 2.0 petrol engine), there’s a five years/unlimited kilometres warranty.

The only major caveat here is a three star ANCAP score for the base SX; go instead for the SLX, which has six airbags as standard. Shares DNA with the Hyundai Elantra, but you get a better 2.0-litre engine with more power, and less geriatric styling, in sedan or hatch body styles, both family-sized. You’re looking at a 2010 S or Si model, with the same warranty as the Hyundai, so you’re still covered against any unlikely problems for a few years. It’s a Volkswagen with a Czech badge, so the usual warnings apply about dubious reliability and high servicing costs, but if you want a small, perfectly-formed, five star family wagon, the eminently sensible and undeniably cute 2008 Roomster is almost irresistible.

The petrol 1.6 is as slow as Tuesday, and prefers 98 octane. So you’ll spend heaps on fuel even though it doesn’t use much. Aren’t European cars wonderful?

Lowest price, based on 184 car listings in the last 6 months

Toyota Yaris Cross Hyundai i30 Toyota C-HR Toyota Yaris
Disclaimer: The pricing information shown in the editorial content (Review Prices) is to be used as a guide only and is based on information provided to Carsguide Autotrader Media Solutions Pty Ltd (Carsguide) both by third party sources and the car manufacturer at the time of publication. The Review Prices were correct at the time of publication.  Carsguide does not warrant or represent that the information is accurate, reliable, complete, current or suitable for any particular purpose. You should not use or rely upon this information without conducting an independent assessment and valuation of the vehicle.