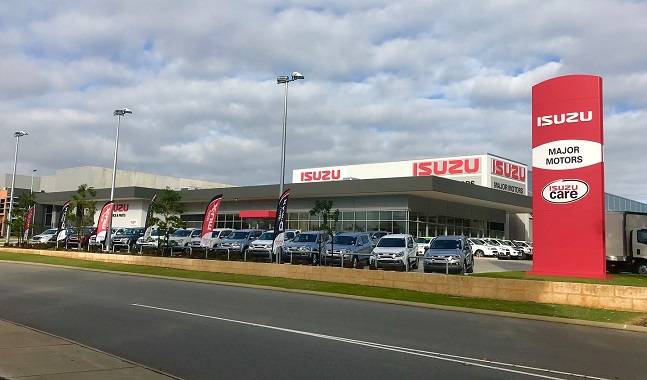 Isuzu is the best selling truck in Australia - and WA's Major Motors is one of the country's biggest dealers of this highly popular and reliable workhorse.

Major Motors is an institution in the states' motor vehicle industry with a lineage that can be traced back to 1934. It was then that Mr Young bought Attwood Motors in Stirling Street, Perth and started selling Chevrolet and Bedford trucks. Over the next half a century thousands of Bedfords and then Holden light commercials were sold as the company evolved into Major Motors in 1971. It secured the Isuzu-General Motors franchise in 1972 and has focused solely on the Isuzu range since the early 1980's.

Proudly a West Australian owned family business, Mr. Young's grandson is still involved in the business along with their partner and Managing Director Bob Pearce who has been with Major Motors since 1971. In fact several of Major Motors staff have also been with the company in excess of 25 years. You can rest easy knowing who ever you talk to at Major Motors will give you reliable advice.

Major Motors main centre of operation is in suburban Forrestfield and it has a lengthy association with Fremantle where its southern branch was a long-time fixture. This operation has now moved to spacious, modern premises in nearby Bibra Lake, which is more suited to the industry's demands. The company has also a parts and service centre in Malaga to service the northern suburbs. You can be assured that all of the metropolitan area is adequately covered to cater for all needs.

Major Motors has a continual commitment to client service and this has been recognised by Quality Assurance accreditation to the latest standards. We are constantly reviewing the QA Management System to maintain a high level of customer service. Honesty and integrity over many years are the hallmark of this successful company and its many, long term employees are testimony to this.